It is currently 82°F here in the City of Angels, still hot but much better than yesterday. Seems like we're getting a little cooperation from the powers that be as the temperature has dropped from 94°F when I left work. My friend who asked me to make my Maple-Peach Bread Pudding told me to shelve it for now and just do it next Friday. But my peaches can’t wait that long so I’m making Peach Cobbler for tomorrow’s birthday party. 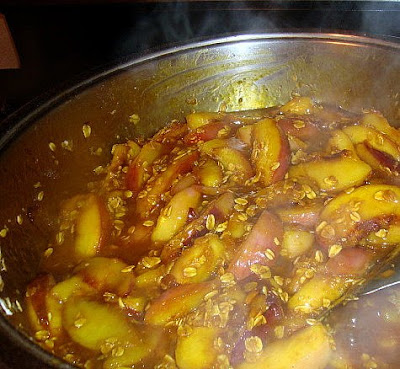 I cooked the peaches in melted unsalted butter, brown sugar, nutmeg, cinnamon, a pinch of salt and I added old fashioned oats instead of cornstarch. I want my cobbler to have some "bite" in the fruit topping. Here's the recipe:

Melt butter in a saucepan add the sugar,cinnamon, nutmeg, vanilla and pinch of salt.
Add the sliced peaches when the butter-sugar mixture becomes bubbly
Toss gently to coat and simmer for ten minutes. Add the old fashioned oats and mix gently. Set aside to cool while preparing the drop biscuit dough.