Without meaning to, today turned out to be my Paella Day. For lunch, I used my spicy Italian sausages along with chicken breast which I sliced and seasoned with Italian seasoning. The rest of the cast is composed of the usual chopped tomatoes, garlic, onion and chicken broth leaving out saffron and paprika to give it a different twist.

I have grown accustomed to my non-stick pan in making rice dishes for obvious reasons- no sticking there and the main reason is my laziness. And since I’m not cooking for a lot of people there’s no need to get my paella pan from the top shelf where I keep stuff which I don’t use everyday- you know, to avoid clutter.

I was curious how paella tastes without paprika and saffron. You would think it is risotto if only I left some broth and made it a little wet. Well, even my risotto is paella-like in texture. Wolfgang Puck will probably be horrified if he sees my risotto but I’ll save the wet texture with other ingredients- in the future :-)

Let me say it was a successful attempt at something a little different so I’m sharing my recipe and it is a welcome alternative if you don’t have paprika or saffron. Here’s how I made it: 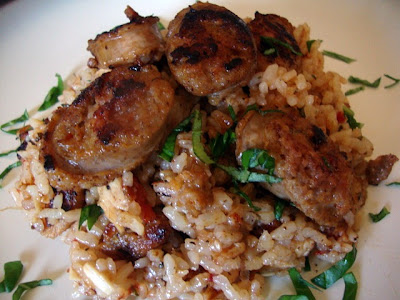 Procedure:
Turn the heat on medium high
Place the sliced sausages on a non-stick pan and allow the fat to render; brown both sides .
Scoop the sausages and transfer to another bowl, set aside
In the same pan, add a round of olive oil and add the chicken
Brown all sides then scoop and transfer to the bowl with the sausages
Still on the same pan, add more olive oil and saute the onion and garlic
Add the rice and stir to coat, about 2 minutes. Add 2 cups of chicken broth. Simmer until liquid is absorbed, stirring often but gently.
Add parsley flakes and continue adding broth mixture 1 cup at a time, stirring often and simmering until liquid is absorbed before adding more, about 20 minutes.
Stir sausage and chicken and cover with aluminum foil. Turn down the heat and allow the rice to cook some more. Garnish with reserved sausages and chopped parsley. Serve hot. 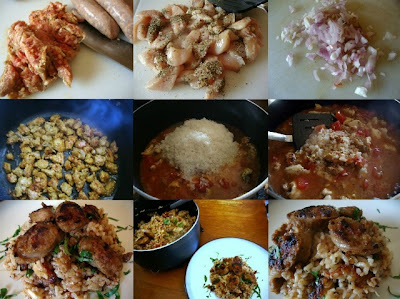 For dinner, I made second paella one which is the real deal- sofrito sauce, saffron and socarrat; the three S's of paella. Sofrito sauce is flavor base of the dish which is tomato sauce, onion, garlic and olive oil infused with paprika, sea salt, cracked black pepper and saffron which is like the diamond of all spices and the one that gives that wonderful flavor to the dish and socarat is the prized crust at the bottom of the paella pan. I used chicken breast pieces and seafood mix and Calrose rice- a pretty modest cast. 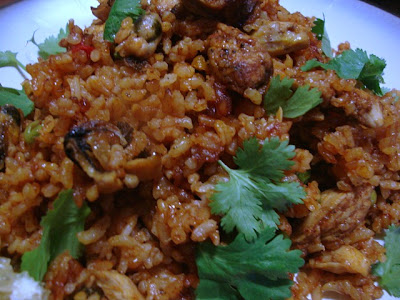 It may not be as grandiose as my past ones which is normally packed with a variety of seafood but this one is bursting with flavor and not in the least inferior in taste. Maybe it's just me but I kinda like the socarrat formed using my non-stick pan because it's not burnt- just toasty goodness. It doesn't mean I am loving my paella pan less. That of course is still the best vessel if making the dish for a bigger crowd. 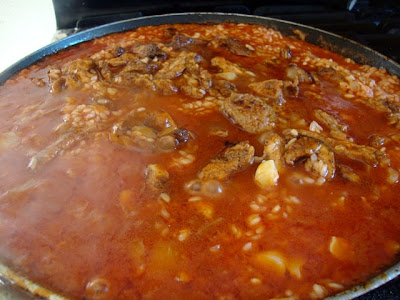 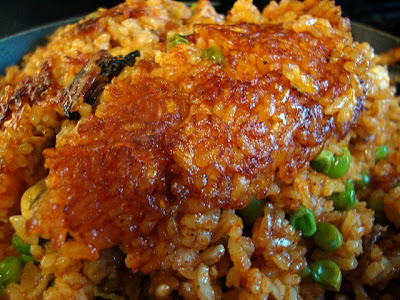 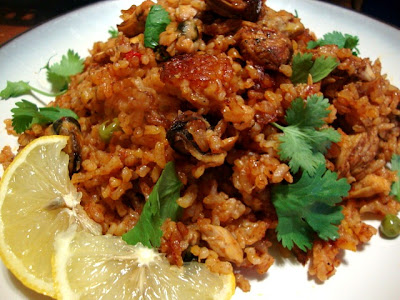