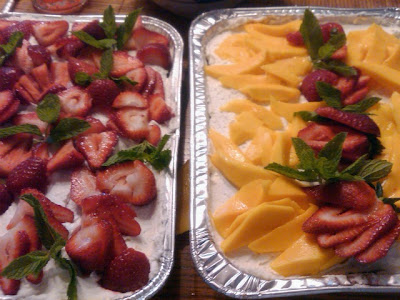 My friend asked me what I’m bringing to work on Halloween. It can’t be just a dress-up occasion, right? We have to eat after taking pictures and giving out candies. A real if not sumptuous lunch is in order for that matter. I may bring dessert on top of something I’m not sure yet.

I just came up with the idea to bring a tres leches cake but a flavor I haven’t done before. I’ve made so many already but mostly fruit topped. It is best made as such because it is a rich cake that the fruit topping especially berries bring balance to all the flavors because of their tartness. But I can say my tres leches cake has evolved, sort of, because I've done other flavors like dark chocolate and chocolate almond tres leches. My toppings are mostly fruits in season and what I love in this cake is that you eat everything, from the topping down to the cake. That's why, I made changes in the recipe and decreased the sugar. I don't want cakes that are too sweet and heavily frosted. They may look pretty but I see people just scraping the frosting off so what's the use? 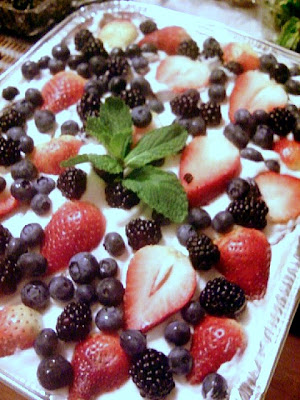 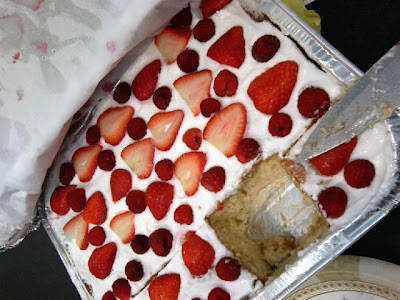 I remember the first time I made it. I was surprised that I pulled it off nicely. I got a lot of compliments when I served it. I even have a picture of my first ever tres leches cake which I topped with mango and strawberry slices. 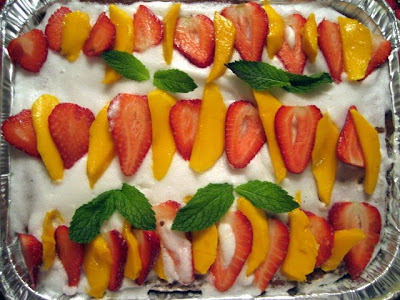 I got the recipe from Emeril Lagasse but I made changes in it which made the cake even better. First, I decreased the amount of sugar and added more milk for the milk bath. I always have the cream mixture or milk bath ready the moment I remove the cake from the oven. Pour it over the cake after poking holes for the mixture to seep in and also on the sides of the cake. Then I freeze it right away. Doing that stops the cream from going all the way down. Leave it there overnight and ice and decorate it the next day. I think the cake is at its best when the milk bath thaws by itself at room temperature. The cream is evenly distributed in the cake and so the cake is moist from top to bottom. 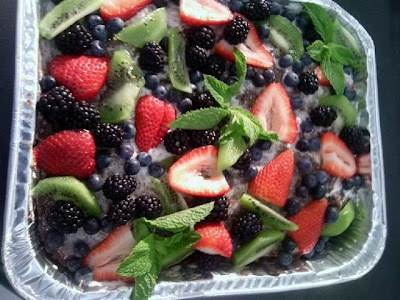 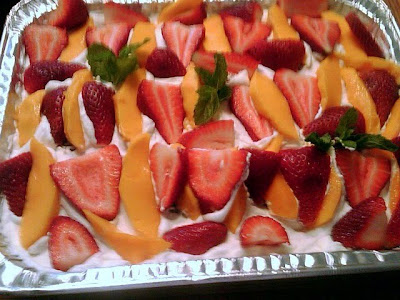 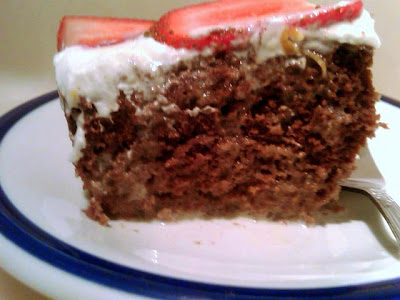 To make the cake:
Preheat the oven to 350 degrees F. Lightly grease and flour a 9 by 13-inch baking dish and set aside.


In the bowl of a mixer, beat the egg whites on low speed until soft peaks form. Add the sugar gradually with the mixer running and peak to stiff peaks. Add the egg yolks 1 at a time, beating well after the addition of each.
Sift together the flour and baking powder and add to the egg mixture, alternating with the milk. (Do this quickly so the batter does not lose volume.) Add the vanilla. Bake until golden, 25 minutes.

To make the cream topping:
In a blender, combine the evaporated milk, condensed milk, and heavy cream, whole milk and blend on high speed.
Remove the cake from the oven and while still warm, pour the cream mixture over it. Let sit and cool to room temperature. Cover and refrigerate until well chilled, at least 4 hours or overnight.

To make the icing:
Once the cake is completely chilled, in a saucepan combine the water and sugar. Bring to a boil. Reduce the heat and stir to dissolve the sugar. Cook until the mixture reaches the soft ball stage, 235 to 240 degrees F. Remove from the heat. In a medium bowl, beat the egg whites to soft peaks. While beating, add the hot syrup in a stream. Beat until all the syrup has been added, the mixture cools, and a glossy icing forms.

To assemble:
Remove the cake from the refrigerator and spread the icing evenly across the top. Arrange the sliced fruits over the top and serve.

Notes:
As soon as the cake is out of the oven, I poke the cake with a fork- maybe six to eight times all around before pouring the milk bath. Then I freeze it and do icing and topping an hour before serving.


So after almost two months and fifty something posts, I ask myself am I happy with my blog? I know I’ve done little changes here and there but it could be better. I would like to have bigger pictures but the way my blog is set up, it will look odd to have huge ones. I want it to be in two columns and to have emoticons and other fonts available would be cool.... wishful thinking or maybe I just need to spend more time and explore the possibilities out there – just waiting…
Email Post
Labels: Bakery Cake Mexican Tres Leches