A co-worker is having surgery tomorrow and she requested me if I can make my Peach Jello Mousse Cake for her. I’ve brought one to work one time but she didn’t get to taste it. So after tasting my Rainbow Jello Mousse from my boss's birthday, we were on the subject of jello mousse and then the request came about.

I don’t know what got into me and chose to follow someone else’s recipe for a sponge cake instead of using my own. Now I have a hard sponge cake sandwiched by peach and strawberry jello mousse. I guess I was challenged by the negative posts of the people who tried the recipe thinking maybe I will be successful-but it was pure disappointment.

So this is my second failed cake; the first one, those mini cheesecakes which deflated lol…. I should post it another time, I think- after all, it's not all glory and success in the kitchen lol...

I still brought the cake to work just to show her I did make the cake for her. Looking at this picture- you would think nothing’s wrong with it till you look closely and realize the sponge cake didn't rise. :-( 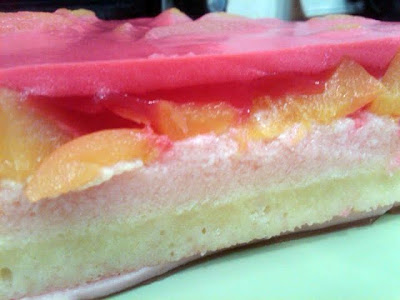 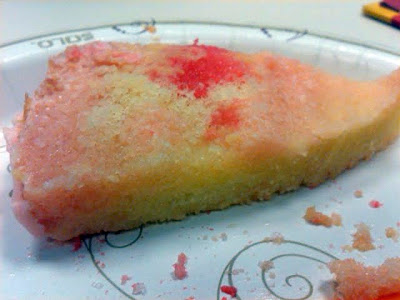 And these are pictures of the Peach Jello Mousse Cake I made before from my recipe. 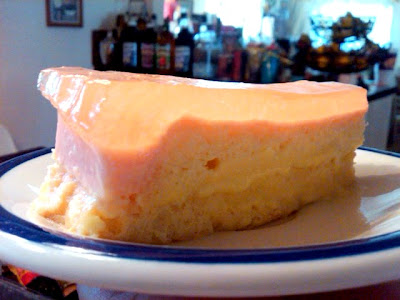 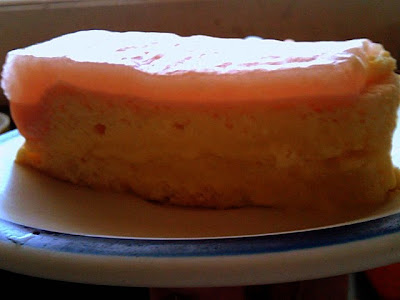 My consolation I guess is the banh mi I ate for dinner and it actually saved the day for me. I was disappointed with the result of the cake I made but another food cured it all :-)While I love fatburger so much; it’s just an occasional indulgence while I can eat banh mi everyday because of the crusty baguette, the crunchy veggies and the luscious meat with jalapeno and cilantro- it’s just a very nice combination and I don’t feel bloated after eating it.... just satisfied and happy tummy!

1.Bring a saucepan of water to a boil. Plunge the carrot and radish sticks into the boiling water and after a few seconds, remove them and plunge them into a bowl of ice water to stop the cooking. In a separate bowl, stir together the rice vinegar, 1/2 cup of lime juice and 1/2 cup cold water. Transfer the carrot and radish to the vinegar and lime marinade and let them soak for at least 15 minutes, longer if it's convenient.
2.In a small bowl, stir together the remaining lime juice, soy sauce, fish sauce, sesame oil, canola oil, 1/3 cup sugar and 1/3 cup water. This is the sandwich sauce.
3.To assemble sandwiches, sprinkle a little of the sandwich sauce onto each half of the French loaves. Place your meat onto the bottom half of each roll and sprinkle with a little more sauce. Top with a few slices of jalapeno, a few sticks of carrot and radish (minus the marinade), cucumber, basil and cilantro. Close with the tops of the bread and serve. 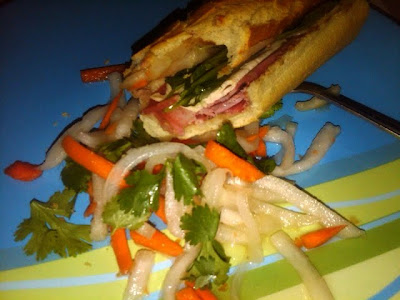 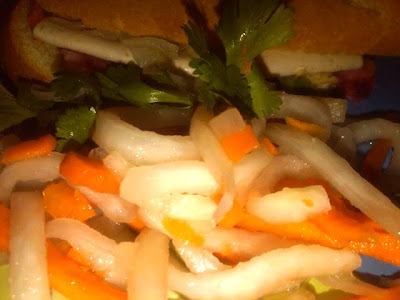