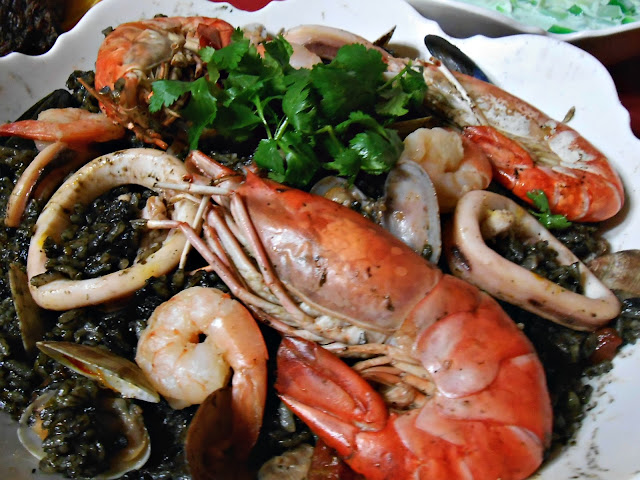 Do not be misled by the title as this is not just the third time I'm making this dish.  It's because I have numerous requests for my recipe and I realized I haven't done it properly- pictures and all.  Unfortunately, my battery died while making the dish on Christmas Eve so my pictures are more from the little buffet table we set.  I guess I'm left with just the recipe and some tips to a successful paella.

Black seafood paella differs from regular seafood paella in the sense that the rice is black from squid ink.  People who are not used to cuttlefish or squid ink finds it weird but for us who grew up enjoying steamed white rice with squid cooked with its ink it comes as no surprise that it could be incorporated in paella as well.  But finding fresh ink is difficult if you're not in the restaurant or food business.  I am not going to drive around looking for it when I can shop for it in the comfort of my bedroom in front of my desktop. 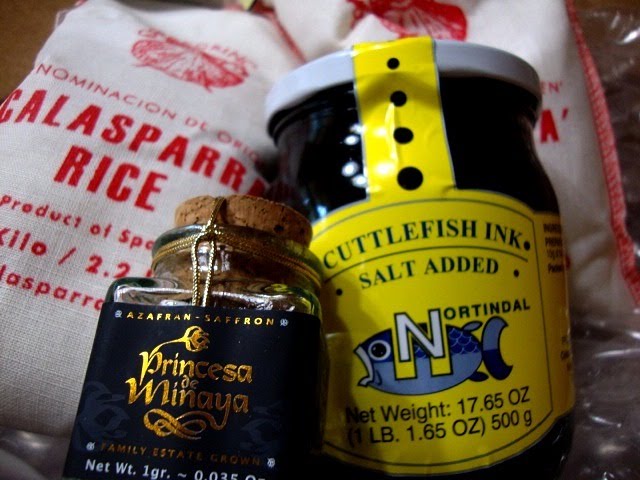 I discovered a Spanish website which sells the best ingredients for paella from rice to saffron to squid or cuttlefish ink.  The 17.65 oz jar goes a long way because a heaping tablespoon of the ink paste is enough for 6-8 cups of rice. It also comes in small packets for a cheaper price if you don't need that much or not thinking about future use.

I learned to make paella using my homeboy Tyler's Ultimate Paella recipe but after making it so many times, I've learned new techniques on my own and used different ingredients to make it always exciting.  I have a Circulon 14" All In One-Covered paella pan which my Secret Santa gave me during our Kris Kringle at work which I cherish although I've had a couple other paella pans too.  This one is the most durable and it is ever dependable- no rusts or spots and it still look good after all these years.  A real paella pan is essential to successful paella because it has a flat bottom which distributes heat evenly.

I used to just tuck my seafood in the rice as it cooks per Tyler's recipe but now, I cook them separately so I can season them already and use the broth for more flavorful rice.  You have to be careful though when cooking the seafood beforehand and make sure not to overcook them.  You wouldn't want tough mussels and clams and rubbery shrimp or squid. 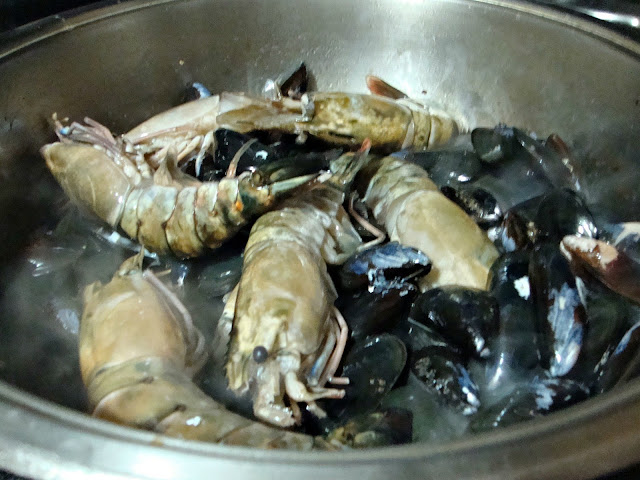 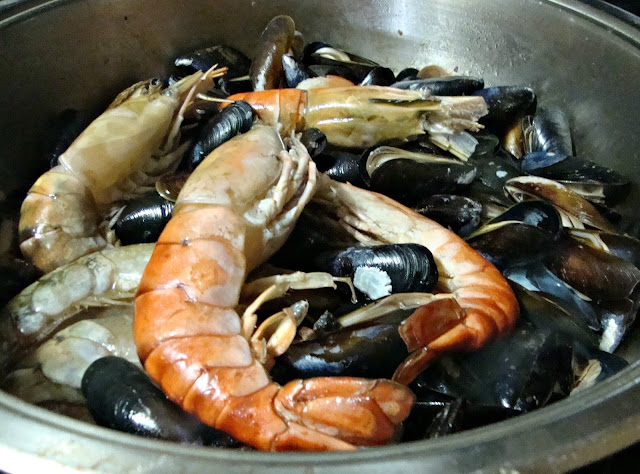 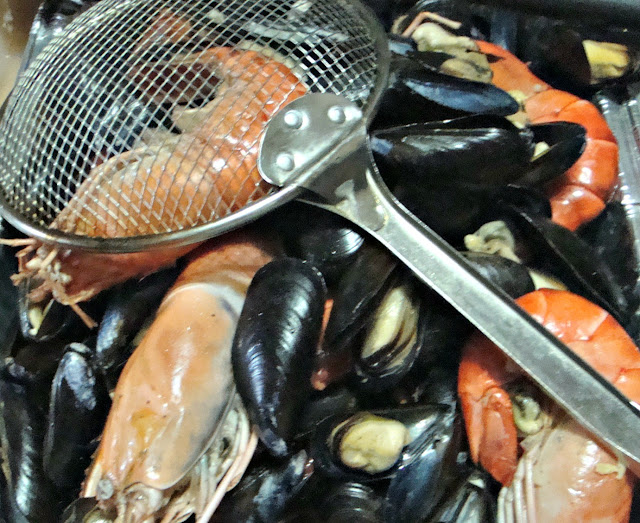 To make the broth:  Boil water in a pot enough to cover the seafood, season it with salt and add a couple of cloves of minced garlic and then scoop the seafood out as soon as shrimps turn pink and shellfish starts to open.  Transfer the seafood to another container while keeping the broth hot on low heat.  You will be adding more broth to the rice as it cooks and using/adding hot broth is to maintain an even temperature which makes cooking easier and the paella better.  Here's the rest of the recipe:

Directions:
Heat oil in a paella pan over medium-high heat.
Make a sofrito by sautéing the onions and garlic. Cook for 2 or 3 minutes then add tomatoes and cook until the mixture caramelizes a bit and the flavors meld.
Fold in the rice and stir-fry to coat the grains.
Pour in seafood broth and simmer for 10 minutes, gently moving the pan around so the rice cooks evenly and absorbs the liquid.
Stir in squid ink paste and add more broth then continue moving the pan around to distribute the ink uniformly
Add the saffron and give the paella a good shake and let it simmer without stirring, about 15 minutes.
During the last 5 minutes of cooking, when the rice is filling the pan, arrange the seafood on top; put the lid on and turn up the heat for two minutes to allow the steam to envelop the seafood.
Remove from heat and rest for 5 minutes.
Garnish with chopped cilantro or parsley and lemon wedges.
Enjoy!