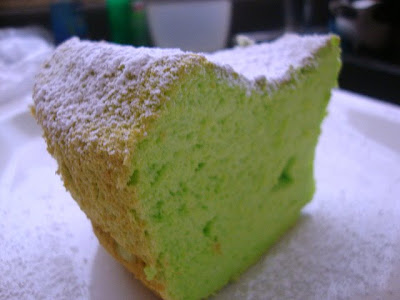 Last month, Michelle tried another angel food cake recipe which she posted at Soompi. It's one of Alton Brown's who we all revere and admire to say the least. Michelle described the cake as softer than when she uses my recipe but she maintained her posture that she prefers my recipe because of its sugary crust. In return, I told her I’ll try it myself and keep her posted on the result. So today, I decided to try it. Comparing Alton’s recipe to mine, I found out that he uses half a teaspoon more of cream of tartar which I believe is due to the addition of a third of a cup of warm water; to stabilize the cake. There are only minor differences so the recipe is just as easy as mine. I wanted to make it in ube flavor but realized I’m out on ube flavoring so I opted for buco-pandan.

Using egg whites from 11 extra large eggs, my batter almost filled the tube pan but glancing at the glass oven door as it bakes, I saw it didn’t really fill up the pan. Without water, it could have. And when it was finally done, I saw it shrunk a little bit and pulled away some from the sides. But when I finally sliced it, it was really soft. But like Michelle, I prefer the texture of my angel food cake. I will try using warm water again but maybe decrease the quantity to a quarter of a cup and see what happens. 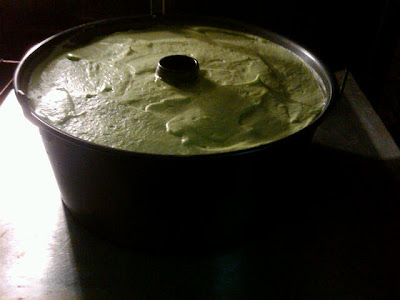 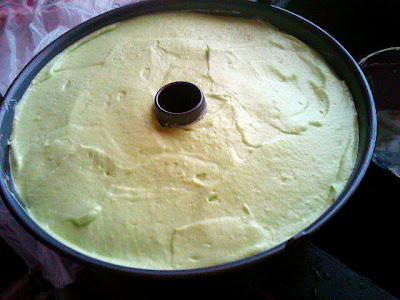 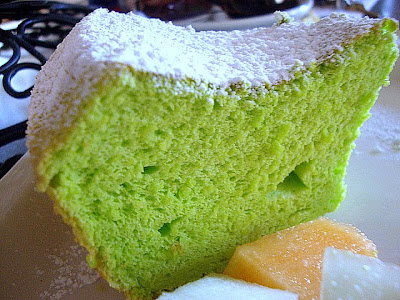