KFC, a birthday cake and more ... for my BFF

While I had that little luxury of catching up on my reading last Saturday, I devoted Sunday to prepare a simple Korean lunch for my best friend. He eats fish and veggies but he’s also a proud meat lover and would mimic Rahm Fama of Food Network’s “Meat and Potatoes” and does his “MEAT MEAT MEATY MMM-MEAT chant when he sees me prepare any meat dish. So I prepared the other KFC, Korean Fried Chicken- using leg quarters so he could have his favorite drumstick and the thigh as well. Small cuts of chicken preferably wings are ideal for this recipe but it was supposed to be a birthday treat so why not serve his favorite part of the chicken? 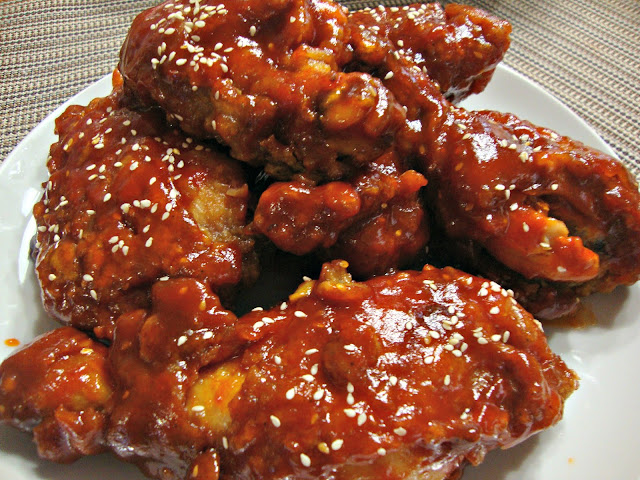 Method:
1. Cut the leg quarters in two, rinse in cold water then drain
2. Season with black pepper and kosher salt and let stand for at least half an hour
3. Whisk together the flours and baking soda then add/sprinkle to the chicken with eggs
4. Mix well by hand and completely coat the chicken.
5. Put 6-7 cups of canola oil in a wok or frying pan and heat it up.
6. After it’s heated for about 7-8 minutes, test if the oil is ready by dipping a sample chunk of chicken into the oil. If the oil bubbles, it’s the right temperature to start frying.

Fry them using the double-frying method:
1. Fry the chicken chunks for 10 minutes over high heat.
2. Take them out of the oil and shake them off in a strainer. Let them sit for a few minutes.
3. Fry them again for another 10 minutes until all pieces look golden brown and are crunchy outside.
*tip: If your skillet is not large enough to fry all the chicken at once, divide it into batches.

Note: I omitted second frying and instead finished off the chicken in the oven for 30 minutes at 350 degrees F after frying for 10 minutes. That way, the chicken had a crunchy exterior and cooked all the way. You can put an aluminum tent on top of the chicken to avoid browning too much 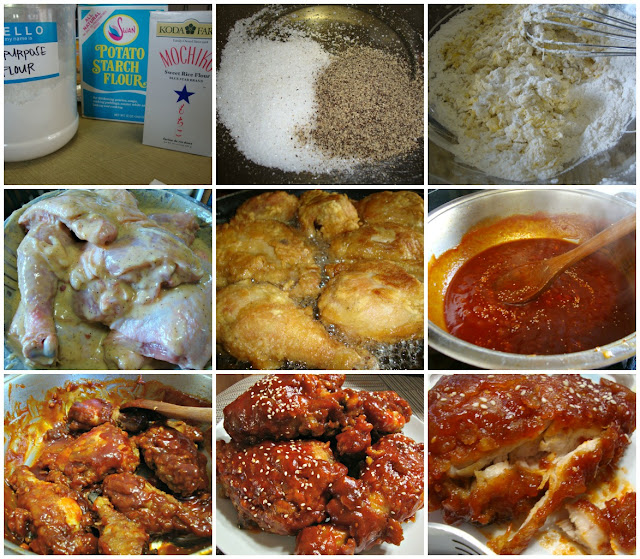 While you are frying, you can make the sauce

Method:
1. Put canola oil and minced garlic into a heated pan,
2. Add tomato ketchup, honey, hot pepper paste, apple cider vinegar and simmer the mixture for about about 7 minutes. Keep your heat low and be sure not to burn the sauce.
3. Turn off the heat and wait until the chicken is done.
4. Reheat the sauce.
5. Put the freshly fried chicken into the sauce and gently mix it up with a wooden spoon.
6. Sprinkle some roasted sesame seeds over top and serve hot

Like I said, BFF loves veggies just as much as he loves meat- so in a way, he still eats a balanced meal. Come to think of it- he just loves food, period! or better yet, he loves good food! So I made jahp chae to go with KFC because it is loaded with shiitake mushrooms, carrots, bell peppers and spinach. It is a recipe from an old post. 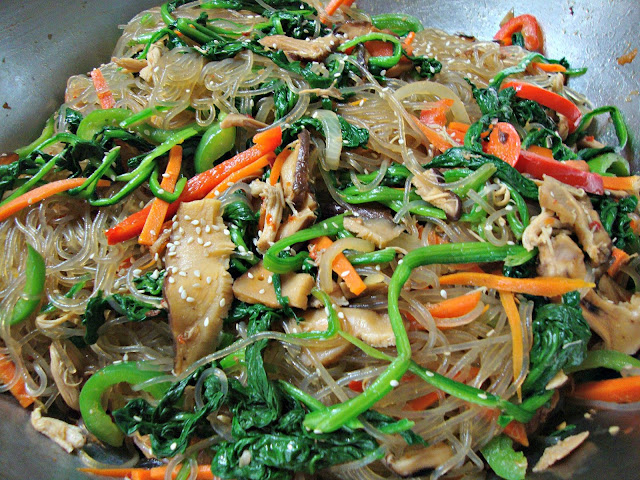 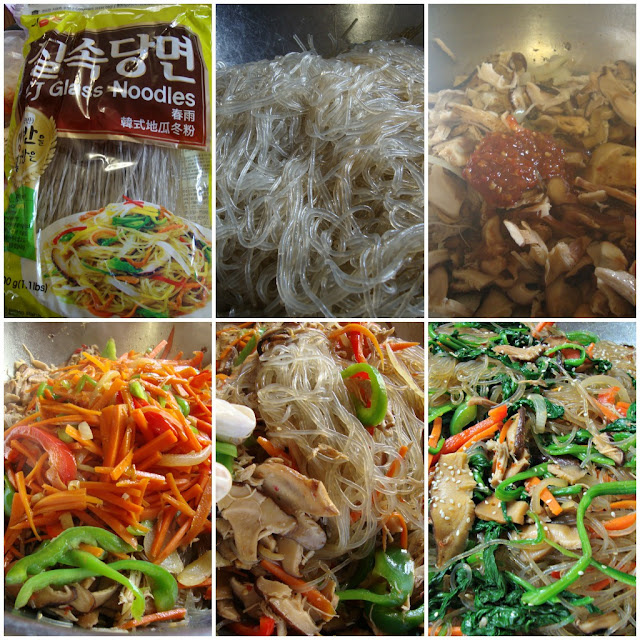 It seems I bought so much spinach so I decided to make a little salad called Shigumchi Namul. Amazing how very little comes out of the huge bunch of fresh spinach. BFF didn't even notice it which is to my advantage because I love this side dish and what I made is just enough for me ha ha... 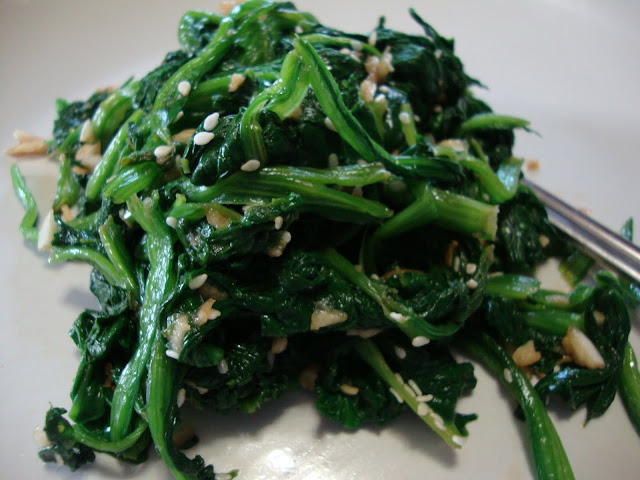 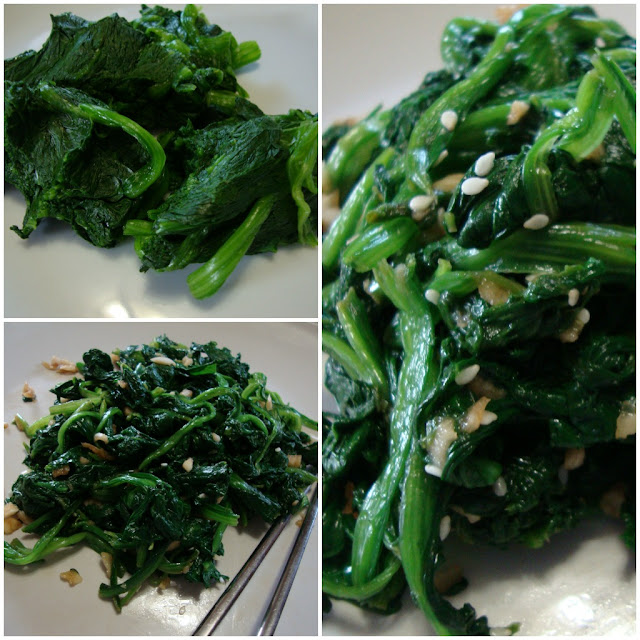 The birthday tribute will not be complete without a cake so I made a special four-layer Coconut Angel Food Cake with pineapple-cream cheese filling and vanilla cream cheese frosting. I've made this cake so many times but it's the first time I made one this tall. 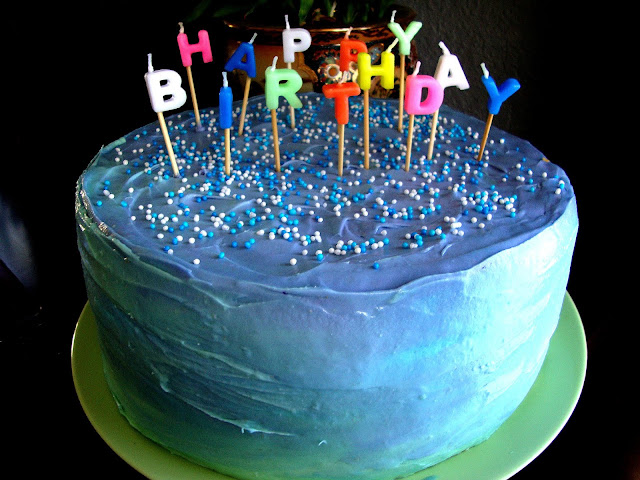 Angel food cake is one of his favorites and he loves all the flavors I make but I think I had him at pineapple cream cheese filling. He was all smiles right when he took his first bite of the cake and me, I was just happy to feed him good eats on his birthday. 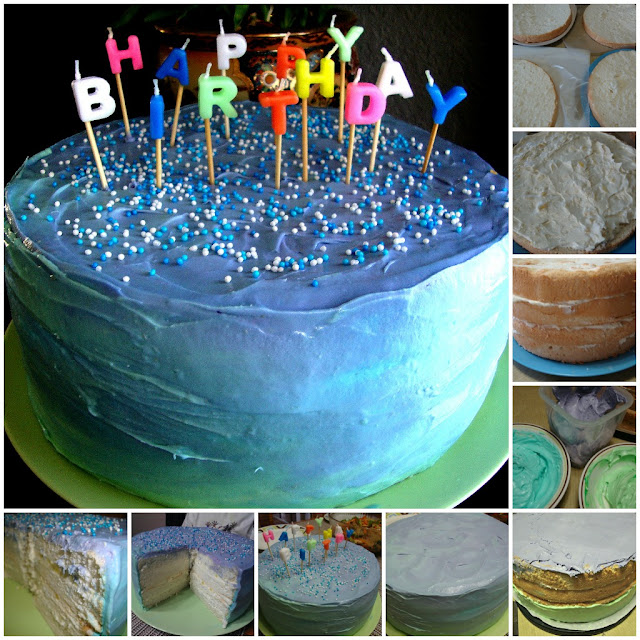