I’ve been eating salad the past couple of days- house salad from a Thai restaurant, tuna salad from Subway and chicken club salad from Jack in the Box. It just dawned on me that I could have just made them and saved myself some bucks. But who thinks about economy when one is lazy? In fact, I shouldn’t be buying food when I could just bring home-cooked meals to work. All I have to do is put food in my plastic containers which are overflowing our drawers by the way. Some new, some with missing lids- but I should talk about it in another post :-)

The house salad from the Thai restaurant is a bed of iceberg lettuce, carrots, cucumbers, Vidalia onion, cilantro, chopped chicken breast, hard boiled eggs, tofu and peanut dressing. Pretty simple and very easy to make but I must say it’s really good, refreshing and filling as the same time. I think it will taste just as good with honey mustard dressing. 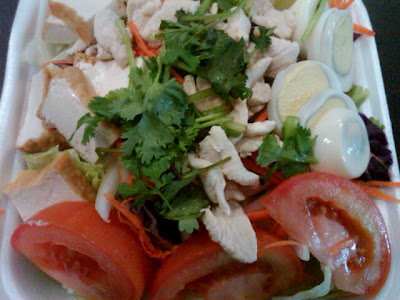 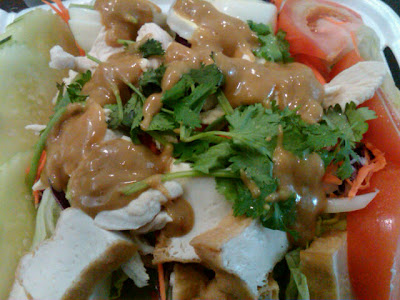 If you’ll look closely, this tuna salad looks familiar, right? Oh well, at Subway you can create your salad from their sandwich ingredients minus the bread and it becomes a salad. So this is just my tuna sandwich from my earlier post. A bed of baby spinach, tomatoes, cucumbers, red onion, sliced jalapeños, honey mustard, feta cheese and two scoops of tuna. Instead of bread, I had whole grain crackers on the side and they’re a perfect match and none of the bloated feeling after eating. 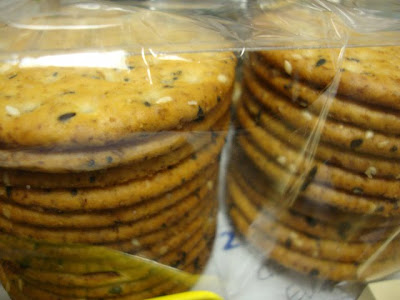 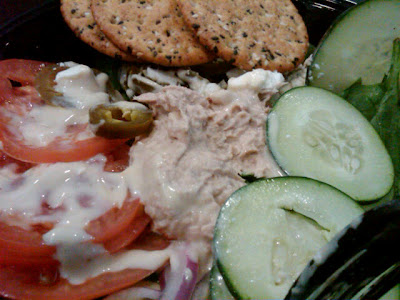 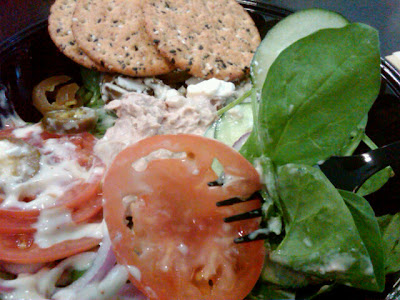 I didn't take a picture of the Chicken Club Salad from Jack In The Box because I didn't know I'll be on salad mode thereafter. It is a blend of iceberg, romaine and spring mix with grilled chicken (you can opt for crispy which is fried but grilled is healthy) cucumber slices, red onions, grape tomatoes, bacon bits, shredded cheddar cheese and served with Bacon Ranch dressing and seasoned croutons. It was pretty good because the veggies are fresh but I find it a little salty because of the bacon bits. Maybe it's just me but it is advisable to put the bacon bits on the side and just toss some in the salad sparingly. But for bacon lovers, just enjoy the whole package.
Email Post
Labels: Salad