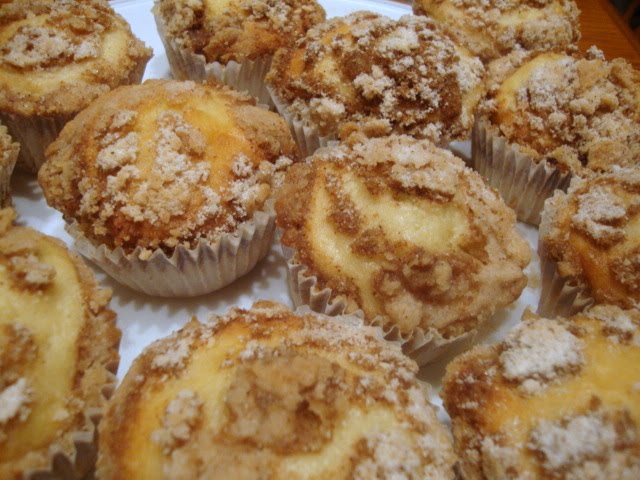 I could have done something more but this should be my first step in trying to go back into the cooking groove. I’ve slacked for days and I don’t want to go into details anymore as to the whys and wherefores. Suffice it to say I just can’t then- but I’m inching back now.

I made Cinnamon Streusel Muffins last night for starters. I initially thought of some pasta and mango cake but I ended up doing this anyway. Besides, I felt that I should make something new- something I haven't done before.

The muffins came out really good although I took it easy on the cinnamon. I think I should tell you now that cinnamon is one spice that I really use with precision (meaning, it should not be too much; just enough to suit my taste ha ha ha)because too much of it turns me off. I hate cinnamon flavored gum, toothpaste, tea, coffee, and anything laced with it. I can tolerate it but sparingly ha ha ha... or I could use more but I'm not eating any. But I use it for tasty dishes along with other spices. Pat Sinclair would laugh at me if she reads this coz' she prefers using Vietnamese cinnamon for stronger and more spicy flavor and I'm the opposite. Following the recipe, they're not sweet at all- in fact, I could have added some more brown sugar for the streusel topping and they will still be delicious.

Heat the oven to 400°F with the oven rack in middle. Lightly spray 12 cups in a standard muffin pan with nonstick cooking spray or grease with shortening.

Streusel Topping
Combine the flour, brown sugar, and cinnamon in a small bowl. Cut in the butter with a pastry blender until the mixture resembles coarse crumbs with some pea-sized pieces.

Combine the flour, sugar, brown sugar, baking powder, cinnamon, and salt in a large bowl. Make a well in the center of the flour by pushing ingredients out toward sides of bowl.

Combine the milk, melted butter, vanilla, and egg in a medium bowl. Pour the milk mixture into the flour mixture, and stir only until the flour is moistened, even though the batter is not smooth. Scrape down the sides of bowl.

Divide the batter into prepared muffin cups, filling them about 2/3 full. Sprinkle about 1 tablespoon of streusel over each muffin.

Bake 18 to 20 minutes or until golden brown and a toothpick inserted in the center of a couple of muffins comes out dry. Cool slightly. Run a small metal spatula around edge of each muffin to loosen it, and lift gently from the pan. Serve muffins warm with butter or jam. 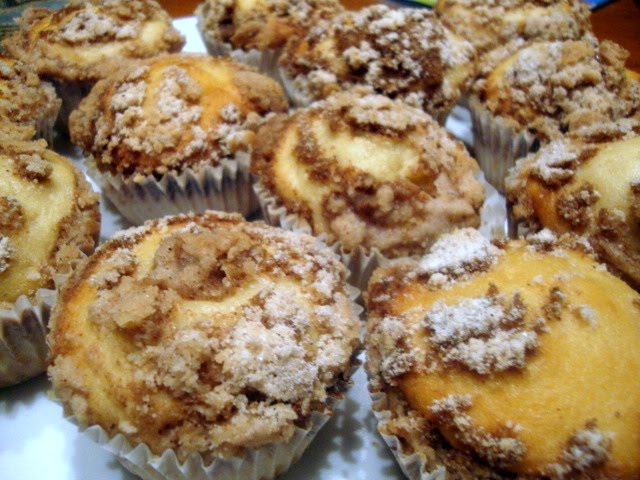