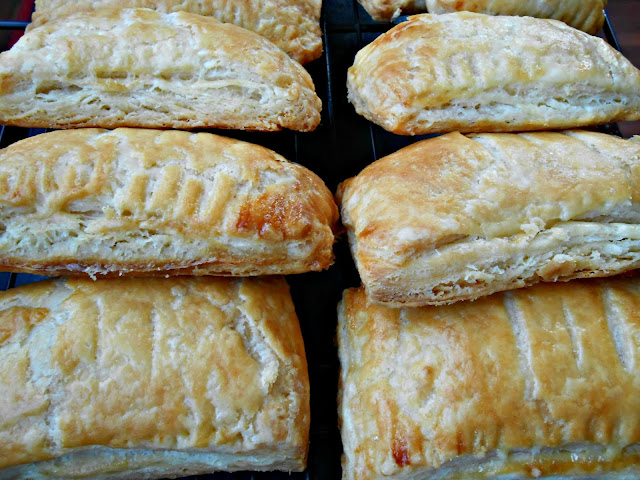 There are but two items I love from Porto's; the cheese rolls and the pastelitos de guayaba-the latter being my ultimate favorite. You can find even better cheese rolls from other bakeries but for the guava pastries, it is synonymous to Porto's IMO. But I'm not always the "buying" kind. Rather than pay all the time, I'd rather try to replicate the stuff I like if I can or attempt to do so at the very least. It's not always easy but the fulfillment from the end results outweighs all the challenges therein. I'm sure all of you foodies out there can identify.

The plan to make my own pastelitos de guayaba version dates back to C's early days in "our team" when we were just discovering that we are both foodies and conversations are mostly about food and different cuisines. To make the story short, she came one morning with guava paste so I can make my own pastelitos. To the fridge it went when I got home and then I forgot all about it obviously. You could have seen a pastelitos de guayaba post here if I was able to make it ha ha.

I guess it was not time to make it and so I went on with my life- the pastry forgotten and even with occasional encounter with the delicacy through gifts or treats, it was not enough to inspire me to make it.

And then K gave me little gifts from her Epicure Imports shopping spree which included gourmet guava paste. I am so glad I saved it because the time has come to make my own pastelitos de guayaba. 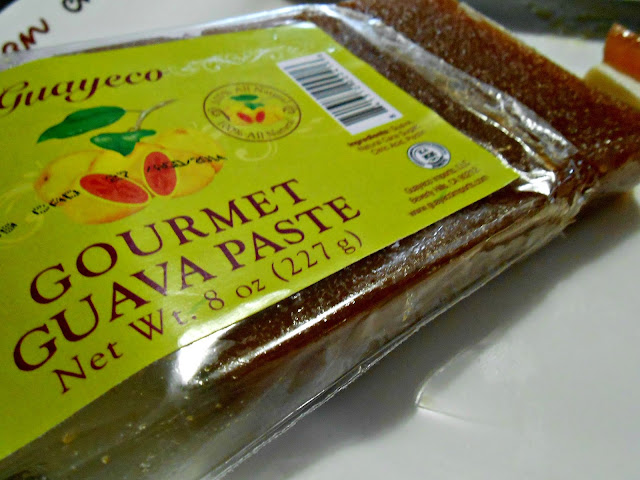 This guava paste (more like fruit roll up in texture) is the bomb! I was in heaven from the moment I opened up the package. The aroma said it all as I struggled to stop myself from eating more lest I won't have enough for my pastelitos. Sooooo good with baby brie and by itself! 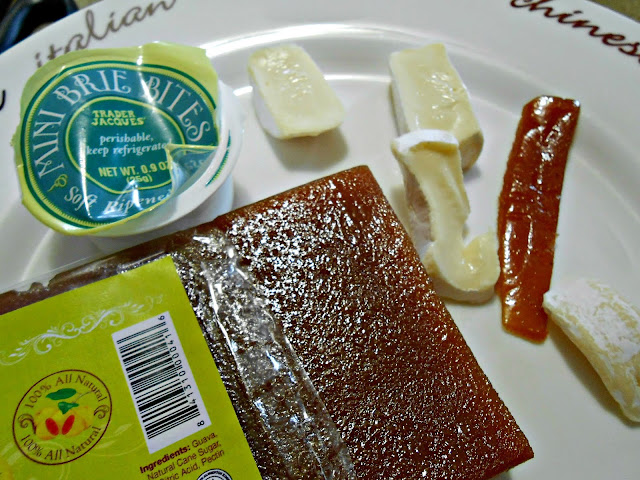 I thought about buying puff pastry but decided I’d make my own- not the puff pastry as it requires too much work and a lot of patience. Okay, let me rephrase that – maybe not a lot of work but a lot of patience; something I have long ago accepted that I don’t have much of. You should know by now as you look at the pictures in my posts. I was going to choose between my empanada crust and pie crust recipes but I stumbled upon another recipe which has almost the ingredients as my pie crust but with the addition of sour cream. So I thought I’d give it a try. 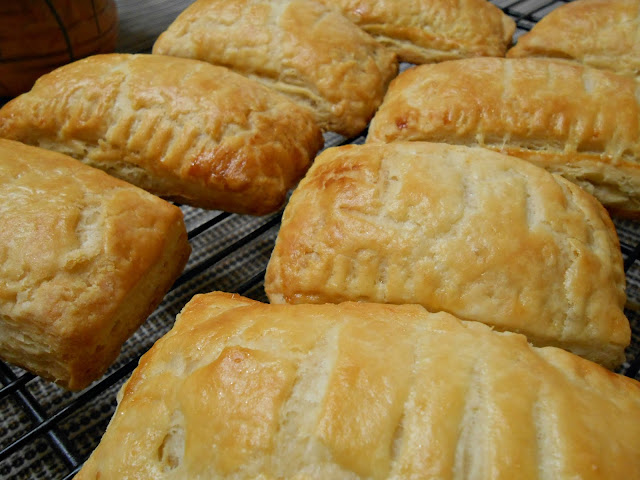 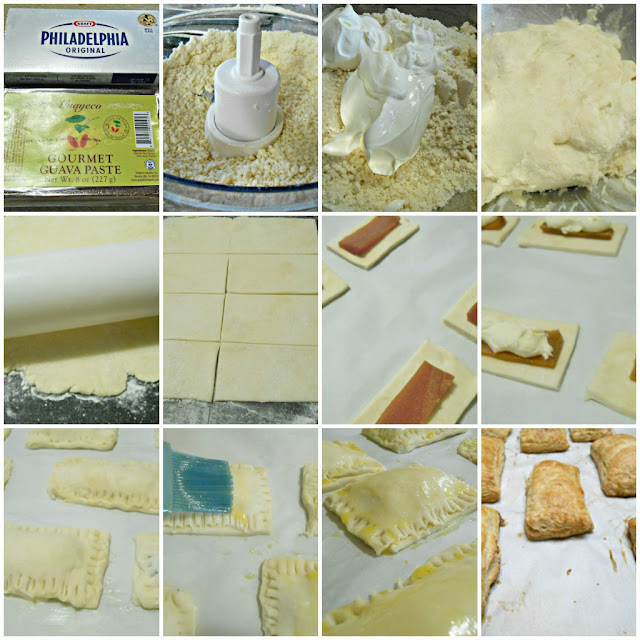 Directions
1. Combine the flour and salt. Cut in the butter with a pastry blender until the mixture feels like course sand.
2. Stir sour cream in with a fork. Use your fingers to press into a ball.
3. Divide in half and flatten into a roughly square shape. Wrap each in plastic wrap and refrigerate for 4 hours up to 3 days.
4. After dough is done chilling, process the cream cheese, egg, sugar, vanilla, and zest in a food processor until smooth. Set aside.
5. Remove one piece of dough from the refrigerator. Set aside for 10 minutes before rolling. Roll on a floured surface, into a rectangle, a bit less than 1/8 inch thick.
6. Cut the pastry into 2″x3″ rectangles. (After you cut rectangles, you can ball-up and re-roll left-over dough.) Lay half of them on a un-greased baking sheet. Place a slice of guava paste on the center of each.
7. Add a gently rounded teaspoon of cream cheese filling on top.
8. Brush egg wash along the edges of each pastry and rest another rectangle of dough on top. Press down on the edges to seal. Use a sharp knife to make three little slits on each pastry.
9. Brush all of them with egg wash and refrigerate for 30 minutes. Now you can preheat the oven to 375 degrees F and work on the other piece of dough (repeating steps 5 through 8 with it).
10. Bake for 25-28 minutes or until lightly browned. Transfer to a wire rack to cool for 10 minutes. Serve warm. 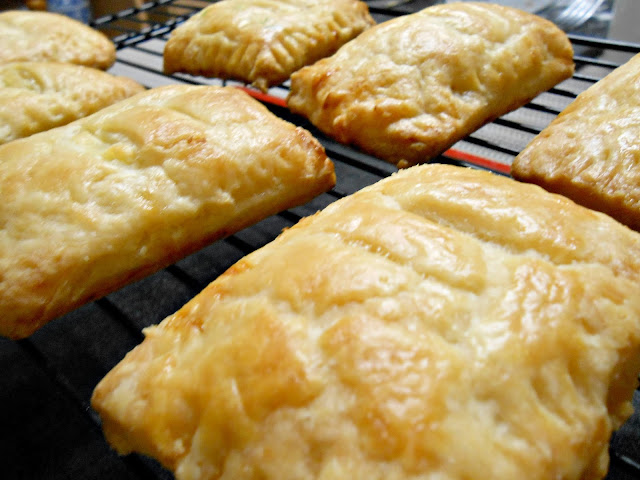 The pastelitos came out perfect-puff pastry-like flaky and the filling is over the top. The tart guava paste and the sweet cream combination is just perfect. I wonder what's in the sour cream that made the difference in the pastry dough. This recipe is a keeper. I don't think I'd be using any more store-bought pastry dough for my turnovers and yes - my pastelitos :-) 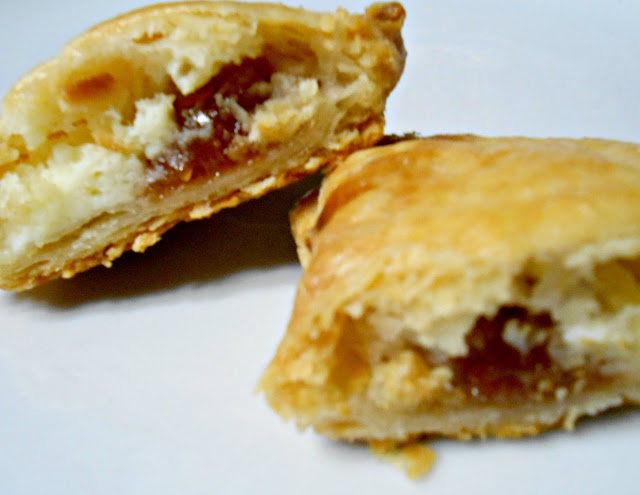 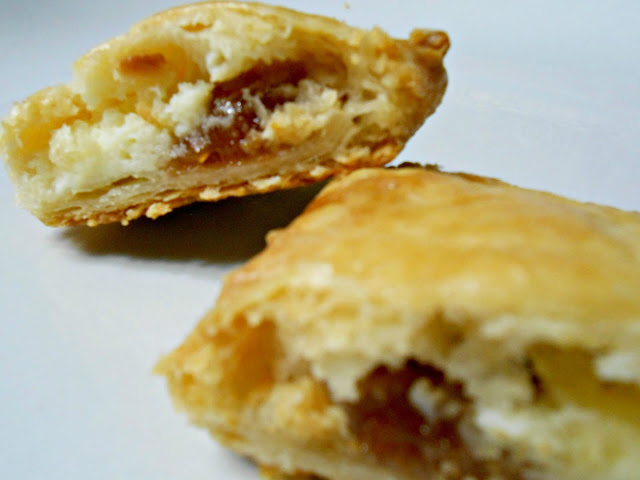