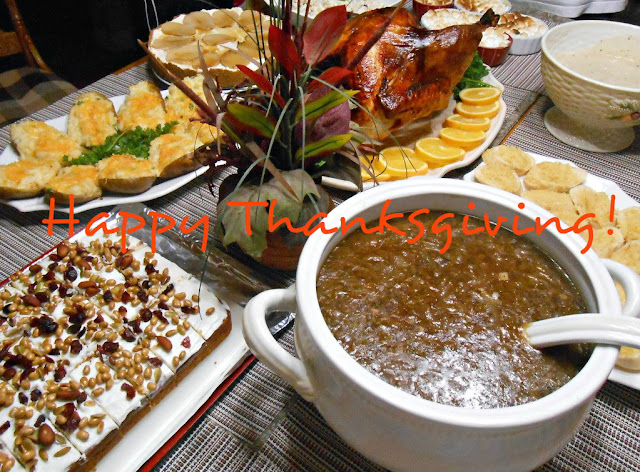 I have decided that this will be a yearly post since I have been commissioned to take over our Thanksgiving dinner for a lifetime maybe. Not whining here. I really enjoy it but more so if only I have more time for preparation. I just can't seem to have enough of it.

I planned a simple repertoire of roasted turkey with gravy and mashed potatoes; cornbread stuffing; baked sweet potatoes with marshmallows; some still undecided soup and veggies for sides and a cheesecake for dessert.

Well not only is time such an expensive commodity- I went home from work last Wednesday with a big headache so I went to bed early but awoke past midnight to do my citrus brine for the turkey. This is a must to ensure the bird will turn out on par with the ones I made in the past. The brine is made with water, brown sugar, kosher salt, apple cider, orange juice, orange peels, fresh rosemary, black peppercorns, garlic and lots of ice and the turkey needs to hang out there overnight and until roasting time.

The next step is washing off the brine in preparation for roasting. I just put it in a colander, turned on the tap and just let the bird bathe in clean water. I made sure I rinsed the cavity as well.
Preheat the oven to 500 degrees F.  Chop an apple and onion and microwave for five minutes with quarter of a cup of water, cinnamon stick, rosemary and thyme. The mixture is then stuffed into the cavity after the turkey is patted dry.
Then canola oil is rubbed generously over the whole turkey before it goes on to the roasting pan into the oven.  The 500 degrees F temperature is only for the first 30 minutes and then it is lowered to 350 until it's done which should be an additional two hours.  I use a meat thermometer which should register 170 degrees F for the thighs and legs and 160 for the breast.  Remove from the oven, cover with aluminum foil and rest for 15 minutes before carving. 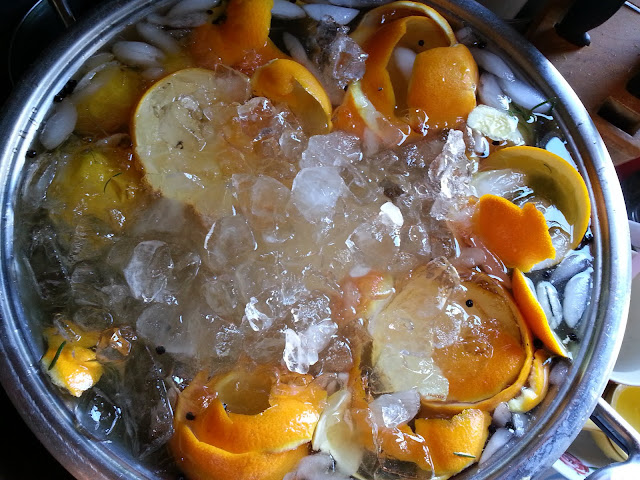 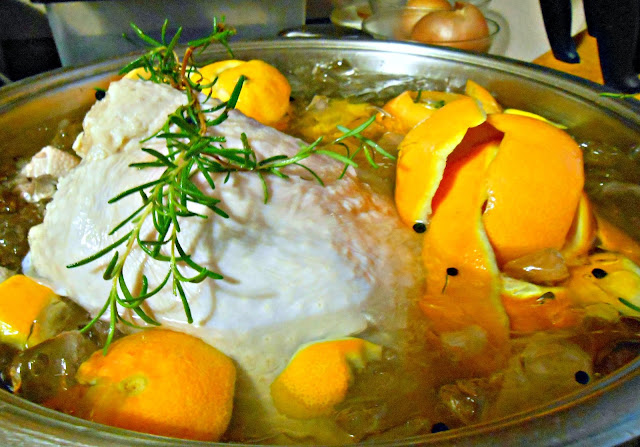 The cornbread stuffing was scrapped from the menu and was replaced with macaroni salad which is basically elbow macaroni with celery, purple onion, chopped ham and crushed pineapple. The dressing is mayo, apple cider vinegar, sweet pickle relish, celery seeds, Dijon mustard, fresh cracked black pepper and a little sugar. 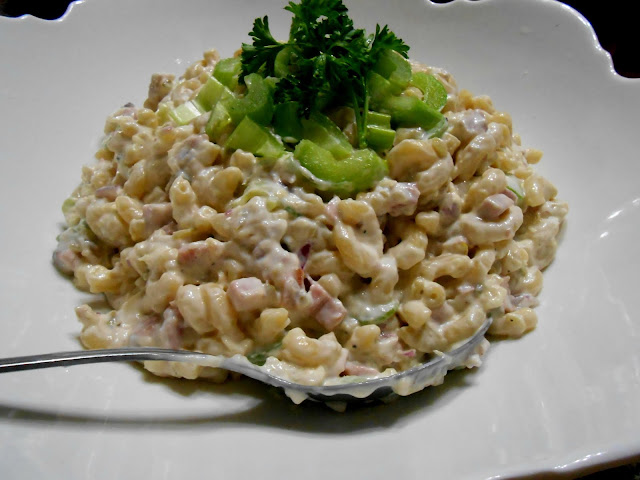 The matter of the soup came down to a request for French onion soup which I haven't done in the past but the ingredients are ready and I am not one to shirk away from my cooking duty (more like a challenge). But I was already overwhelmed as I think about getting all the soup bowls in the broiler to melt the cheese croutons. I had to think of a way out of that daunting task. I felt that with the number of people coming for dinner, it is better to serve the soup in a big serving bowl with the Gruyere cheese croutons on the side and just let them help themselves and make their own cups. It worked! The Gruyere cheese atop the baguette slices are already semi-melted so ladling the hot onion soup over will finish the melting process and it did. 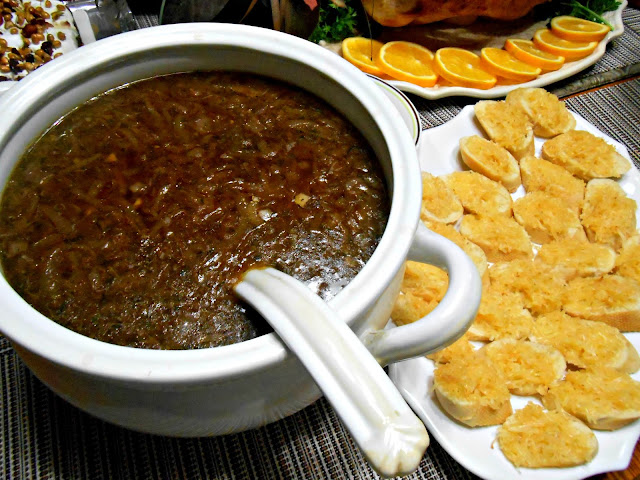 Thanks to my homeboy Tyler Florence for a wonderful recipe! It was a hit! This has more soup and I caramelized the onions nicely before adding the red wine and the beef broth. I think I will make my own stock/broth next time. 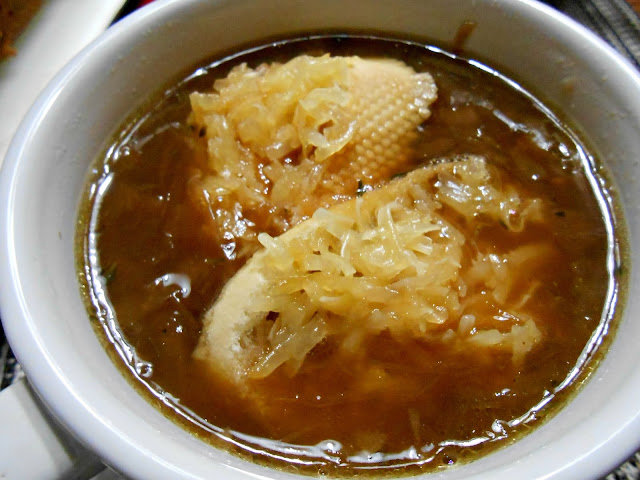 I kind of did a little twist on the mashed potatoes. The potatoes are baked for an hour then sliced lengthwise to scoop the meat/insides which is then mashed and mixed with the works- butter, sour cream, milk, salt, pepper and scallions. Then each shell is filled with the mashed goodness, topped with grated cheddar cheese and popped again in the oven until the potato is warmed through and the cheese starts to melt. 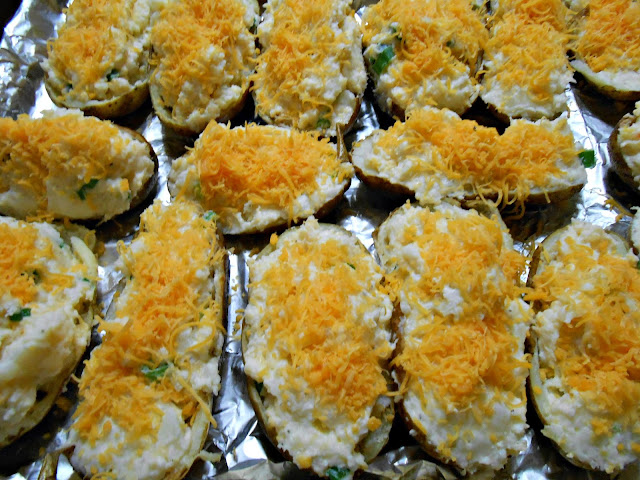 Our Thanksgiving dinner will not be complete without baked sweet potatoes topped with toasted marshmallows. The sweet potatoes are baked then mashed with unsalted butter, maple syrup and a dash of cayenne pepper; placed in ramekins and topped with mini marshies and bruleed in the oven broiler. 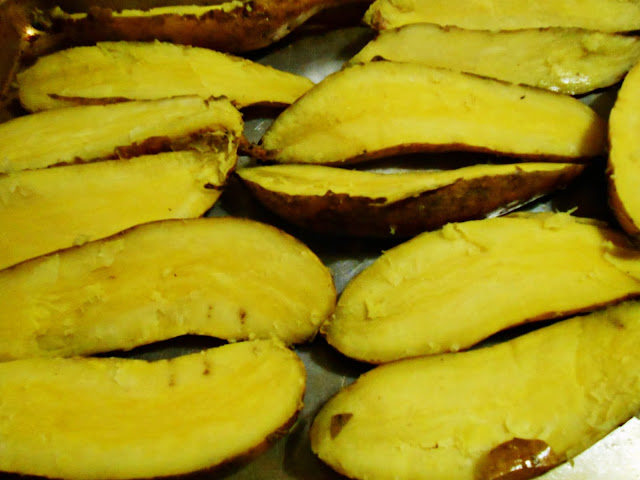 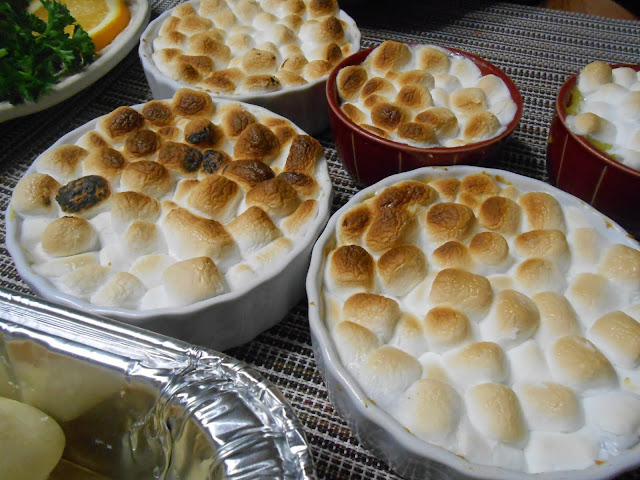 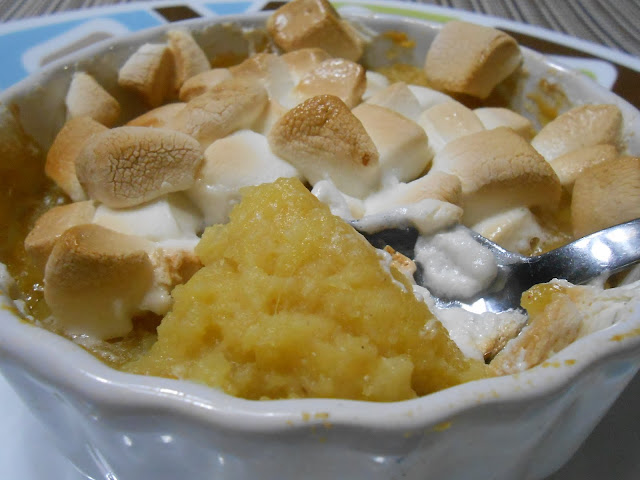 Finally- the desserts! I made Maple Cheesecake with Roasted Pears. I will do a separate and more detailed post on this --- a repeat maybe. I used Graham crackers and unsalted butter for the crust. The filling is cream cheese, maple syrup, heavy cream whipped with powdered sugar. The topping is D'Anjou pears sliced thinly and oven roasted till golden and chewy soft; served with additional maple syrup. 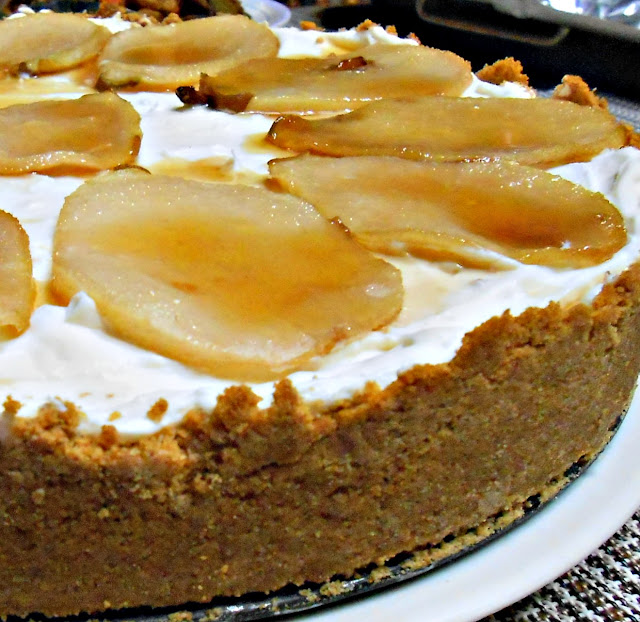 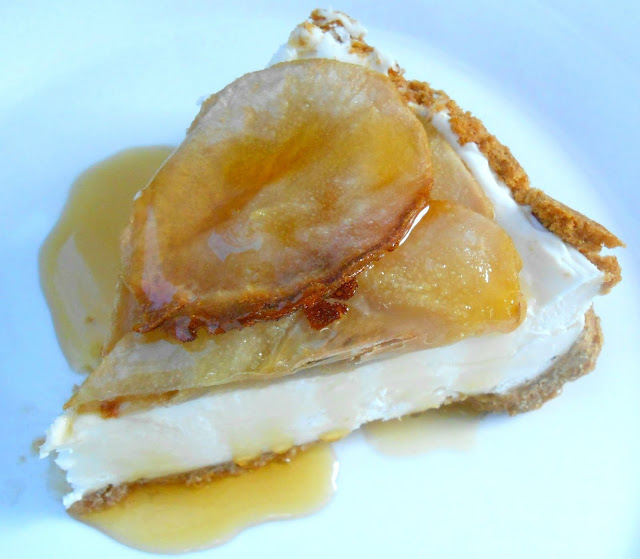 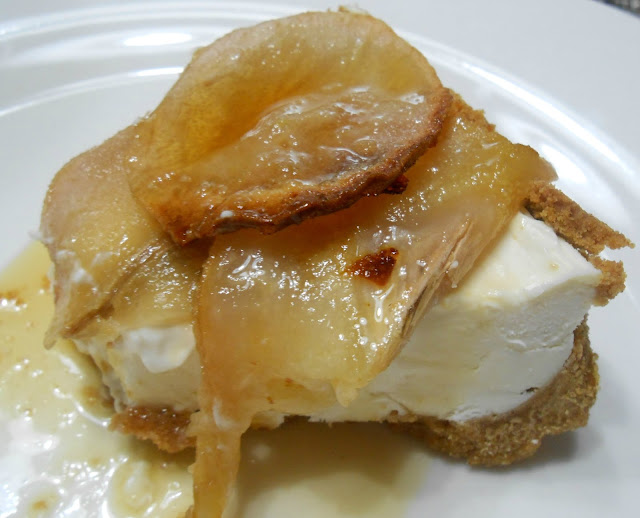 I said desserts so it means there's more! I'm not a fan of pumpkin pie but I still gave pumpkin a little tribute and made cake bars with cream cheese frosting and topped with trail mix (soybeans, almonds, pumpkin seeds and cranberries). 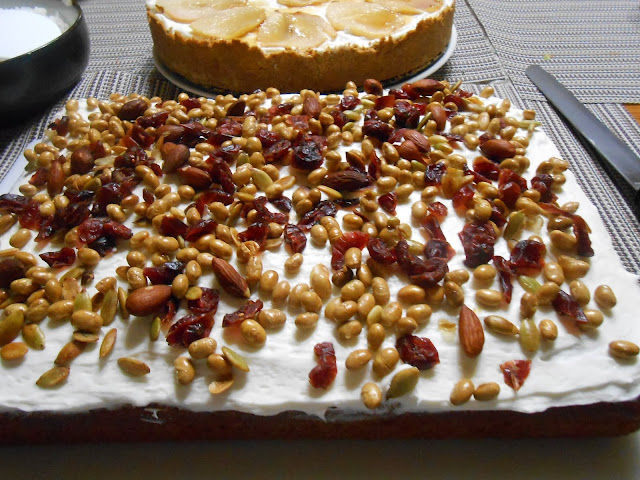 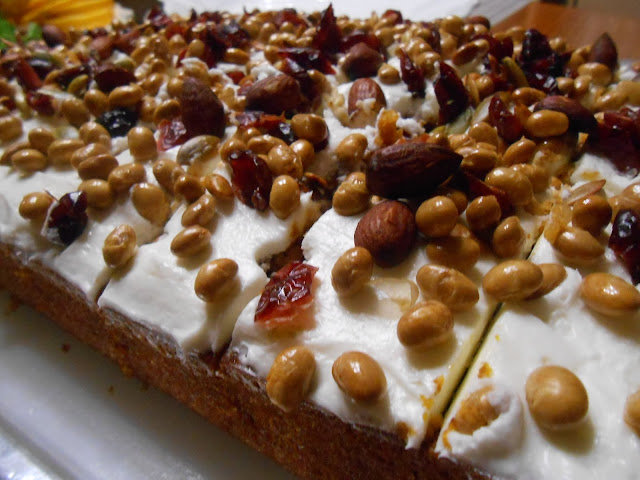 We finally started eating at a little past ten o'clock. Whoa, they didn't even set the table properly but it was good food; a real labor of love to celebrate; give thanks and appreciate all our blessings.  I hope everyone enjoyed as much as we did! 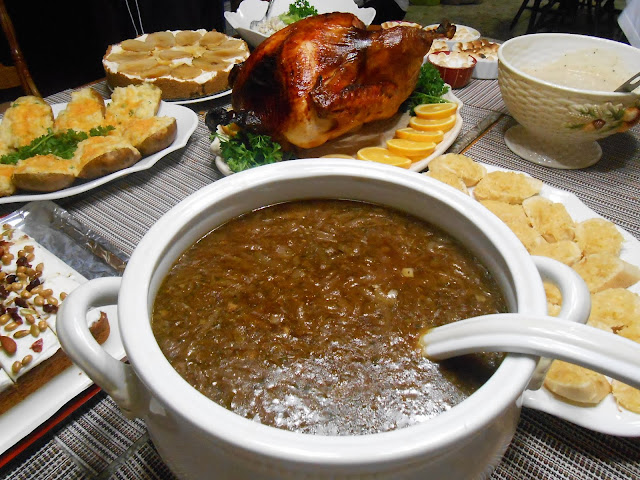