Gifts to start the week on a positive note 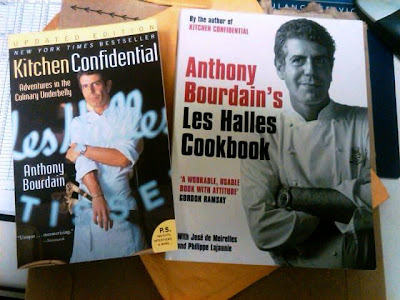 The weekend ended on a somewhat sour note (that’s an understatement actually) but today is a different story. First, the road and the traffic situation were sort of chummy to me so I made it to work sooner than usual. My work place is like Lakersland or Land O’ Lakers because we all root for our home team. After a loss like last night’s – it is a given that we all rant while having coffee or taking a break or at any given opportunity for even the smallest talks.

I clocked in quietly and just went straight to my office, didn’t bump into anyone so no chance for any of the venting and ranting… yet. And it’s all good because after a while, a dear friend presented me her belated birthday presents which also fulfill part of my Wish List. Two books of Anthony Bourdain and it made my day! Now I’m ready for anything... See what presents can do to lift your spirits :-)

I just love Anthony’s wit and spunk. I remember an episode from his TV program when he said in his spiel that Rachael Ray can’t cook. I was like whoooh… (Later on I would understand why he said that- coming from an accomplished chef). I still love Rachael though and Anthony, and Bobby and Tyler and Ina as much as I respect Wolfgang, Mario, Emeril, Paula and most of the guys from FN. Some people you like; some you respect; some you love and some all of the above.

Going back to my books, I have one more coming which will complete my book wish list and although it’s not comparable to a Lakers’ NBA title at this point; I happen to love books a lot so that should amount to something.
Email Post
Labels: Random Rambling