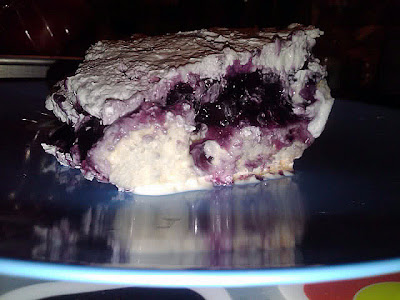 I love cheesecake in all varieties and I also love angel food cake equally that much. The creaminess of cheesecake that melts in your mouth and the light and moist texture of the angel food cake so good, I feel like I can finish off the whole cake by myself. If only I could put the two together as one dessert that would be awesome. Instead of the usual graham cracker crust, why not use pieces of the angel food cake as the base of the cheesecake? So I tried making it tonight, for the first time and on a scale of 1-10, I can honestly give it an eight. It came out good although I have so much angel food cake that the blueberry cheesecake filling is not enough to cover the whole dish. Also I should have followed my instinct and added a little knox gelatine to the cream cheese mix to help make the cheesecake firmer. So it is included in the recipe and an additional cup of blueberry filling will help cover the whole dish.

Directions:
Layer as follows:
Break cake into bite size pieces. Layer in large baking dish. Whip together the cream cheese, milk, knox gelatine and sugar. Pour over the cake pieces. Spread blueberry pie filling over this and then top with Cool Whip. Chill for 2 hours or longer.

Recipe for the Angel Food Cake

Preheat oven to 325F.
In a small bowl, whisk together ¾ cup sugar and the cake flour. Set aside.
Beat egg whites until frothy, the add cream of tartar and salt. Beat until fully incorporated then begin to add the remaining ¾ cup of sugar 1-2 tablespoons at a time. When sugar has been added, beat egg whites to soft peaks. You will know when you have soft peaks because the egg whites will look like soft waves and when you lift the beaters, the peaks will droop back down into the batter. If your batter is falling in ribbons, it is not quite down. Don't be afraid to slow down the mixer and check a few times as you get close. Do not beat all the way to stiff peaks. Once you have soft peaks, add the vanilla and almond extracts and beat for a few seconds to evenly distribute.
Sift the flour/sugar mixture over the egg whites in 6-8 additions (depending on your proficiency with folding flour into egg whites) and gently fold it in after each addition. It is better to take your time and do it gently than to rush and deflate the egg whites.
Spoon batter into an ungreased 9 inch tube pan with a removeable bottom. Smooth the top with a spatula and tap the pan on the counter once or twice to ensure that there are no large bubbles lurking beneath the surface.
Bake for 50-60 minutes, until the top springs back when lightly pressed. Mine took 45 minutes to bake. Remove from oven and cool completely before running a thin knife around the sides then the bottom to release the cake
Email Post
Labels: Angel Food Cake Bakery Cheesecake