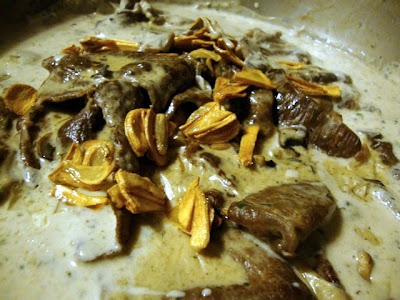 My very first dish for 2011! Still smarting from another bout with asthma and cough, I was able to muster some strength and cooked my first dish for January. This was actually included in my New Year celebration menu but I was indisposed. Anyway, it is not a difficult dish to cook and this is something that you can serve with steamed rice or with pasta or some dinner rolls. I prefer it over a bed of penne. I used beef clod steaks which I seasoned lightly with salt and pepper, browned on both sides in a little butter. A creamy mushroom sauce follows with fried garlic completing the cast. It actually gives the dish another dimension; sort of breaks the richness along with parsley flakes and nutmeg. This recipe is a keeper.

Brown steaks on both sides in butter and canola oil mix over medium heat. Do not crowd the steaks in the pan. Set aside.
In the same pan, sweat the mushrooms (add a little butter if dry)and add ground pepper
Allow to cook for two minutes then deglaze the pan with the beef broth.
Simmer for another two minutes then remove from the pan
Melt butter in the same pan then sprinkle flour to make a roux
Stir using a wooden spoon then add the half and half
Add the steaks, mushrooms, nutmeg and parsley flakes
Add more broth if the sauce becomes too thick
Meanwhile in another pan, fry the garlic in a little canola oil till light brown- do not burn
Sprinkle over steak and serve on a bed of pasta 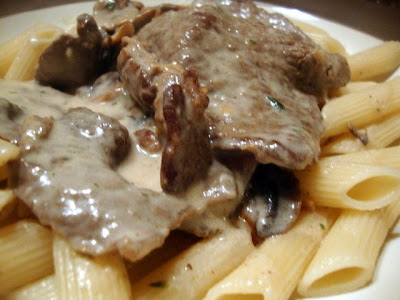