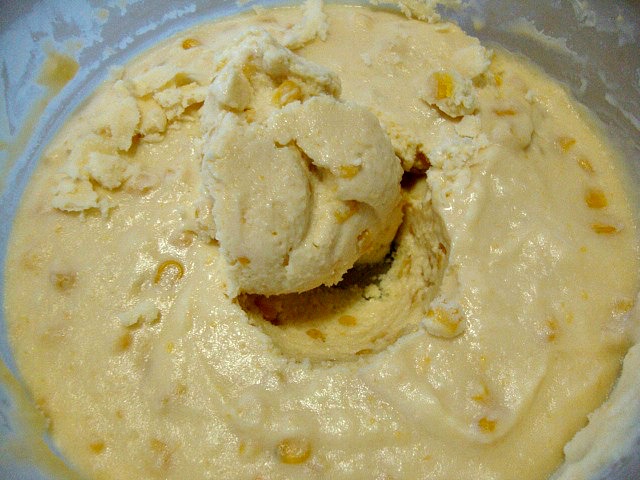 If you think I’m done with gelatos, you’ve got another think coming! Sweet corn just made it to my "Just Made" list last weekend as mentioned in my last post. I feel like I can make all my favorite flavors into gelato and that includes sweet corn.

I love sweet corn in many forms actually but I learned my lesson when using sweet corn in desserts starting from my sweet corn panna cotta where I ended up using canned cream style corn to achieve a deeper corn flavor. There was nothing wrong with the corn, they're fresh and with such beautiful looking kernels but I just didn't get that real deep corn flavor so I used the same canned corn and then some organic corn kernels from Trader Joe’s which I folded into the gelato before freezing. I wish I could tell which corn will come out flavorful but just like in choosing watermelon; even tapping it and listening to the hollow sound it makes does not guarantee a sweet one.

You may say that using canned corn is easier and really, making the custard base is easy- having so much practice thus validating the adage "practice makes perfect" but processing the cream style corn takes a little patience. I had to press the corn over and over again over a wire strainer so that all that was left was the coarse skin of the corn- whatever was left while the rest of the creamed form just made its way through the strainer easily. 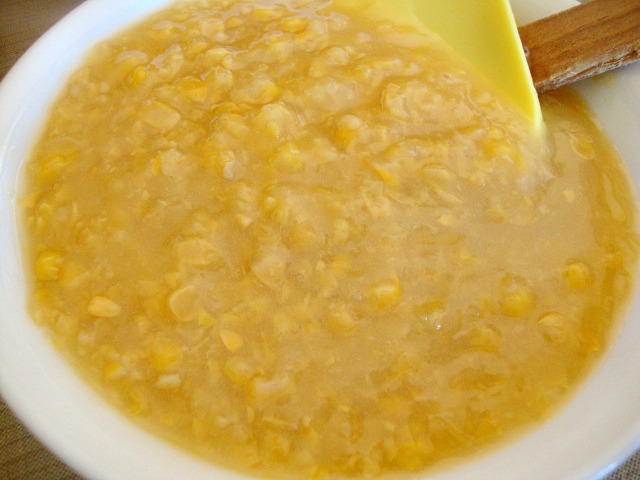 That is how I got that real corn flavor and I added the kernels towards the end- nuked just to make it tender. A little more patience goes a long way although I forgot to take pictures of that part (pressing the corn thorough a wire strainer) of the preparation. 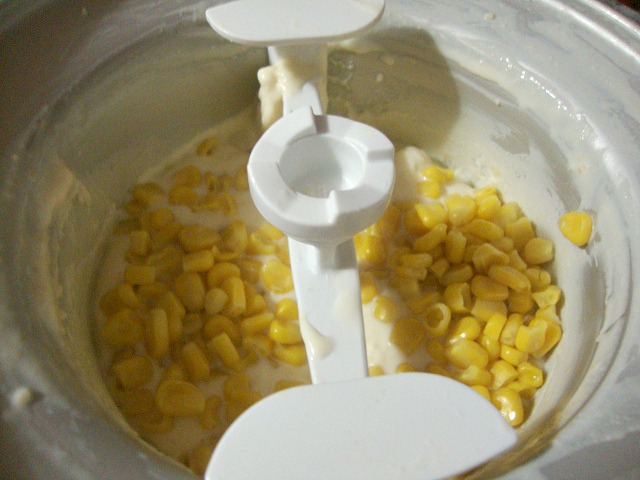 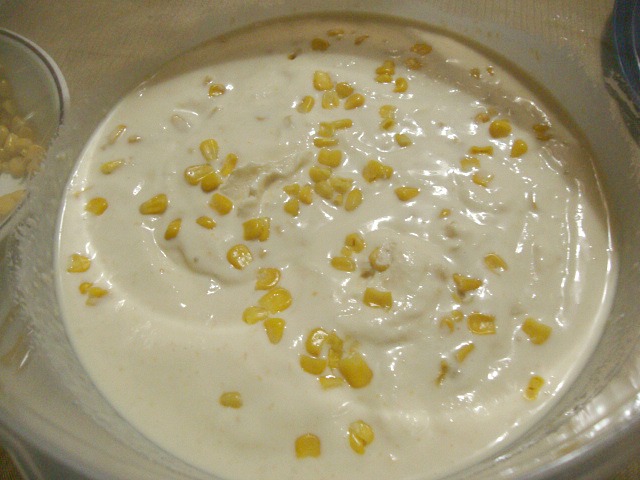 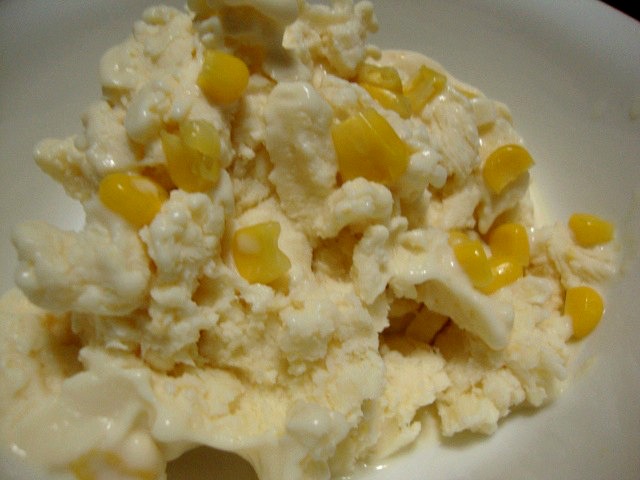 Method:
* Whisk together egg yolks and sugar in a bowl using an electric mixer util pale and thick- set aside
* In a sauce pan over medium high heat, gently simmer half and half and whole milk. Turn off heat and remove mixture from the stove
* When the half and half and whole milk mixture has cooled down a bit, slowly add to the egg yolk mixture while mixer is running.
* When all the half and half and milk mixture has been added to the yolk mixture, return to the sauce pan and back into the stove over medium heat. Add the cream style corn and allow to simmer stirring continuously until it starts coating the back of the wooden spoon.
* Now pour the mixture over a wire strainer in a bowl placed over iced water and press the corn with a spatula. Do this repeatedly and pour some of the cream mixture to wash it off. Discard all the trapped coarse corn skin in the strainer
* Stir in the remaining cup of half and half and pure vanilla extract
Transfer to a lidded bowl and refrigerate overnight
* Next day, transfer the mixture to the ice cream maker and churn slowly until you reach soft serve consistency. Fold in the corn kernels and transfer to again to a freezer jar and store for two hours for a firmer consistency 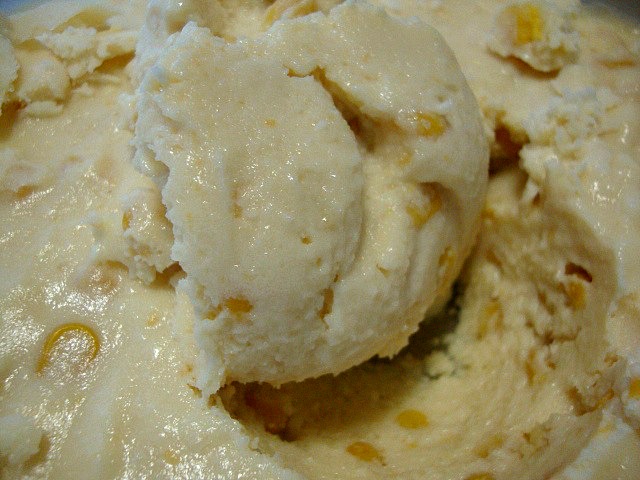 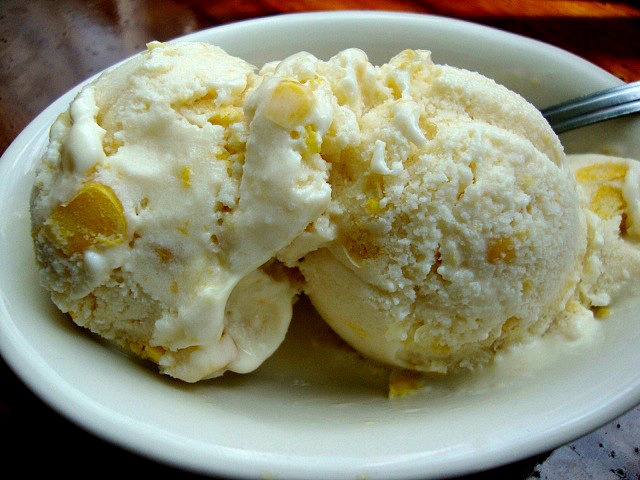 I would love it with cheese bits and young coconut strings but this is delicious by itself. 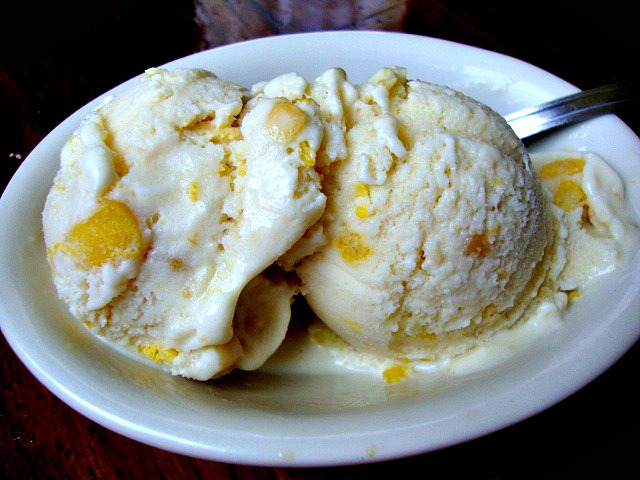