Hello everybody! I know I was MIA again for quite a bit. No excuses this time though. I’m just glad to be back again. Over the weekend I baked two cakes for two special people- one for Wilma- my sister in our Secret Se-Ga Club and another one for Bill- my co-worker. I’ve said many times already that I don’t have decorating skills so the cakes were the simplest and devoid of any and eye candy decorations. For Wilma I made Raspberry Mousse Cake with Mango Gelée. The base is chiffon cake which I flavored with artificial rum and pure vanilla extract. Then I made organic raspberry mousse which I layered on top of the chiffon cake and for additional color and flavor, I made mango gelée and poured it on top. I wish Wilma’s here in SoCal and not in Canada so she could’ve tasted it. 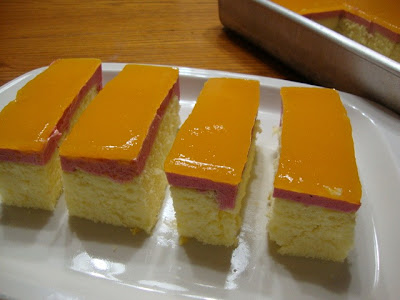 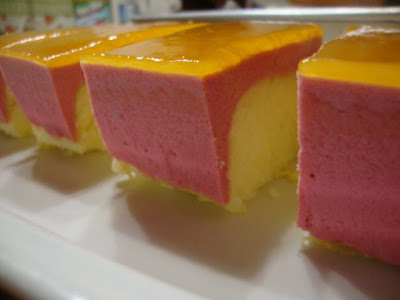 For the chiffon cake base

Method :
1. Mix egg yolks, salt, rum, vanilla extract, and sugar well with a hand whisk.
2. Stir oil into the mixture followed by the water
3. Sift together flour, salt, and baking powder. Fold the flour mixture into the yolk mixture.
4. Whip egg whites in a clean mixing bowl until frothy. Add in the cream of tartar and whip until white. Add sugar in 3 additions and whip until egg whites is stiff.
5. Fold in half of the whipped whites into yolk mixture.
6. Pour yolk mixture into the remaining egg white mixture and fold in.
7. Pour batter into a parchment lined 13 x 9 x 2-inch baking pan and bake at 300 degrees F for 30 minutes or until cake springs back when touched.

Method:
1. Dissolve gelatin in 3 tbsp of boiling water.
2. Simmer raspberries with sugar in a small sauce pan. Puree then strain in a wire strainer to get rid of the seeds. Set aside to cool.
3. Stir warm gelatin into raspberry puree.
4. Whip cream with confectioner's sugar until medium firm.
5. Fold in cooled raspberry puree into whipped cream until well mixed.

Cake Assembly:
1. Pour the raspberry mousse on top of the chiffon cake. Put in the freezer for fifteen minutes or so or until the mousse sets.
4. Pour the mango puree topping gently onto the surface of the mousse cake and chill till ready to serve.
5. Slice with a knife dipped in warm water. 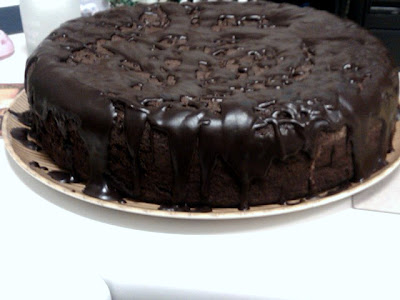 Bill loves only chocolate so he’s easy. I baked him my Spago’s Chocolate Chiffon Cake with chocolate ganache frosting. Well, the cake is gone by lunch time and not everybody got a piece. At least Bill had the first slice and he’s all happy.

Method:
1. Position rack in center of oven and preheat oven to 325 degrees F.
2. Butter or coat with vegetable spray and line with parchment round one 9-inch round cake pan. (I always use a spring form pan)
3. Dust with flour, tapping out any excess flour. Set aside
4. Sift together 3/4 cup sugar, the flour, cocoa, baking powder, baking soda and salt. Set aside.
5. In the large bowl of an electric mixer, with paddle or beaters, beat the egg yolks at high speed until creamy.
6. Turn speed to low and pour in the oil, water and vanilla.
7. Gradually add the sifted ingredients, and when almost incorporated turn speed to medium and beat until well combined.
8. Remove bowl from machine. In another clean large bowl, with whip or beaters, whip the 6 egg whites until soft peaks form.
9. Start on medium speed and raise speed as peaks begin to form.
10.Gradually pour in the remaining 1/4 cup sugar and whip until whites are shiny and firm but not /stiff.
11.With a rubber spatula, fold 1/4 of the whites into the chocolate mixture, then scrape the chocolate mixture back into the whites, quickly folding until completely incorporated.
12.Scrape into the prepared pan (Note: do not fill cake pans more than 2/3 full. If you have some batter leftover make cupcakes.) and bake until edges of the cake pull away from the pan and a tester, gently inserted into the center of the cake, comes out clean, about 30 minutes.
13.To remove, run a sharp knife around the inside of the pan to loosen cake.
14.Invert onto a slightly greased rack (to avoid sticking)and cool completely before frosting.

Directions:
Cook the heavy cream, chocolate chips, and instant coffee in the top of a double boiler over simmering water until smooth and warm, stirring occasionally. Pour over cooled chiffon cake 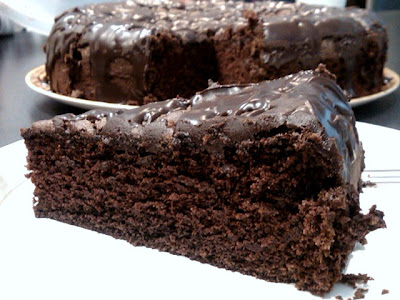