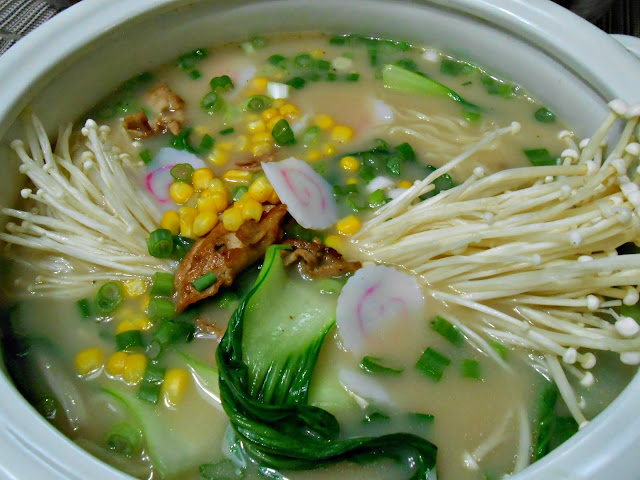 I always think that the day I start making soups, casseroles and other comfort foods is the cue that I am really on autumn mode. I went to my quack appointment last Saturday and from there, went Japanese market-hopping for a little shopping. To be in a Japanese or Korean market gives me that unexplainable thrill and I feel like drowning in a sea of the wonderful aromas wafting in the air from all the produce and cooked food from the stalls and the bakery but not that kind of fatal drowning but like being in heaven. I sound silly, don’t I? I just think of all the things I can make as I wander around the market and I want so many things. But the menu I had in mind comprises of pork ramen; okonomiyaki, vegetable miso soup, curry rice and karaage (Japanese fried chicken) so I had to stick to the plan although I could not resist getting two half loaves of the thick slices of bread which I’ll use for my brick toast; cream puffs from Beard Papa; my favorite Meiji snacks and some kitchen toys from Daiso.

After searching the net for a recipe for the creamy pork tonkotsu broth, I decided to do my own version because it’s too fatty for my taste. I am not cowering from the long hours of making the broth and the tedious process of cleaning the meat. It’s just the fats. So I settled for pork neck bones and chicken backs which I boiled for 8 hours. Boiling includes skimming the scum floating on the top and then finally straining the liquid through a fine mesh. I just needed the broth because it holds all the flavors from all the spices and the charred onion and ginger I added in the pot. 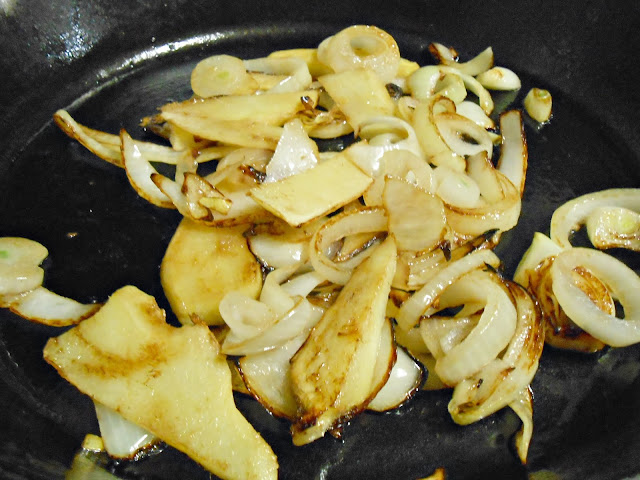 I really regret not being able to take pictures of the whole process the way I normally do with my posts. It was kind of chaotic in the kitchen which requires multitasking and the next thing I know it was time to eat.

NOTE: I received requests for the recipe so I have to post this but I will probably do a repeat so I can take more pictures and update this post)

Hot broth bursting with flavors topped with fresh enoki, sweet organic corn, the fresh bokchoy and scallions, fish cake, the nutty sesame oil and chili powder for kick- what's not to like in this yummy ensemble? Just perfect for a cold and rainy weekend! 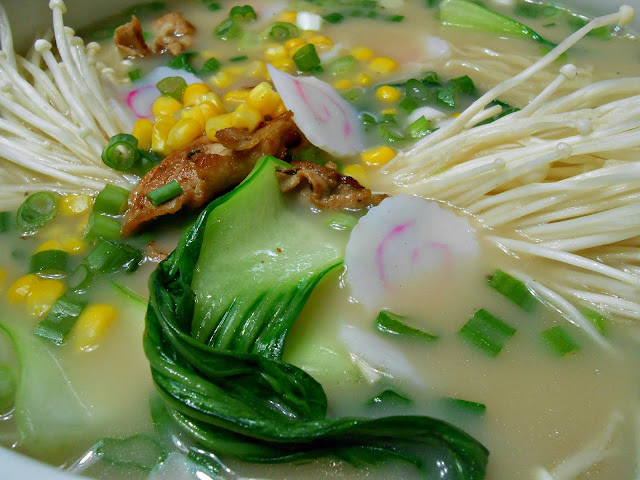 * Meanwhile, heat vegetable oil in a medium cast iron or non-stick skillet over high heat until lightly smoking. Add onions and ginger. Cook, tossing occasionally until deeply charred on most sides, about 15 minutes total. Set aside.

* Once pot has come to a boil, turn off the heat; discard the water and rinse bones to remove residual fats or coagulated blood if needed. Return bones to the pot along with the charred ginger and onion. Cover with cold water and bring to a rolling boil over high heat skimming off any scum that floats on top. Reduce heat to simmer with lid on top. I did this for 6-8 hours checking occasionally if I need to top with more water.

* When the broth is ready, strain through a fine mesh strainer into a clean pot. Discard solids or save the meat like I did (you can serve it with the veggie toppings if you don't like pan fried pork tenderloin). You should have at least 3 quarts broth.

* Return broth to the pot and bring to a boil. Add the Knorr chicken cubes and sea salt to taste. Reduce heat when it starts boiling and just leave it on the lowest flame to keep it hot while preparing the toppings. .

For the toppings:
Blanch the bokchoy
Microwave the organic corn kernels for two minutes
Pan fry pork tenderloin pieces in a little vegetable oil
Trim the bottom parts of the enoki mushrooms- to be used raw
Slice the fish cake thinly - ready to serve
Cook ramen noodles in boiling water for two minutes and drain in a colander

To serve:
Place noodles in a bowl, arrange the bokchoy, corn, fish cake, enoki mushrooms and pork tenderloin then ladle broth on top and sprinkle chopped scallions.
Serve with sesame oil and chili powder or other condiments of your choice.
Email Post
Labels: Japanese Noodles Soup