Still on the somewhat healthy eating path so I started the day with a mug of cereal, milk and a banana. Hmmm.... I thought I haven't had this one. Should have chosen the pomegranate and blueberries. Not saying this one's bad- just not new to my taste. 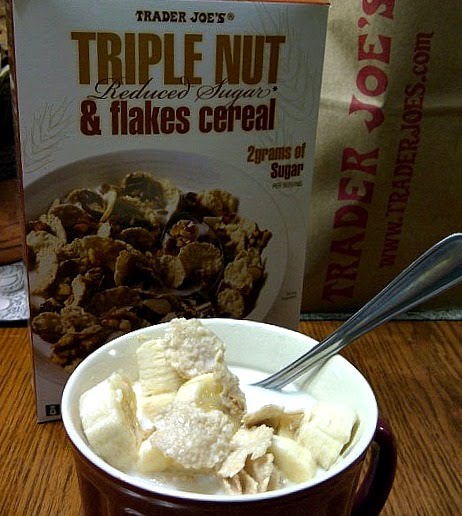 Extending it further to somewhat healthy cooking path, I made vegetable frittata as in vegetable frittata. I even skipped the cheese and used just a splash of 2% fat milk. Frittata is basically omelet except that it is not folded and cooked really slow in an iron skillet if possible because the cooking normally ends in the oven. It is thick and loaded with vegetables, meat and cheese and sliced like quiche upon serving. It doesn't mean you cannot improvise in the absence of an iron skillet like in my case. Now it brings back memories of the one I bought which was mistakenly retired from the kitchen without ever being used- not even once. Going back to my frittata- I skipped the meat and the cheese and came up with a somewhat healthy but delicious version. 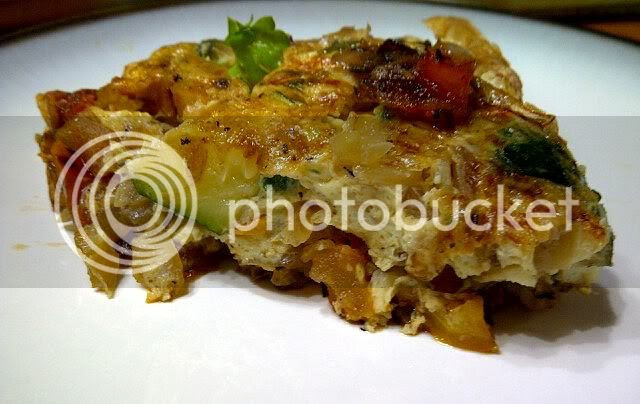 Heat 2-3 rounds of canola oil in a skillet (I used a non-stick pan)
Sauté onion and season with salt and pepper
Add the rest of the vegetables (except the parsley)when the onion becomes translucent
Toss together and adjust the seasoning if needed
Pour the beaten eggs on top and shake to let it seep all the way to the bottom
Sprinkle the chopped parsley on top
Make sure to turn down the heat and let it dry up and cook very slowly
Slide the frittata to a serving platter if using a non-stick pan like me, otherwise, finish cooking in the oven by turning on the broiler, just enough to fully cook the top and give it a light crust
Slice into wedges and serve with toast. 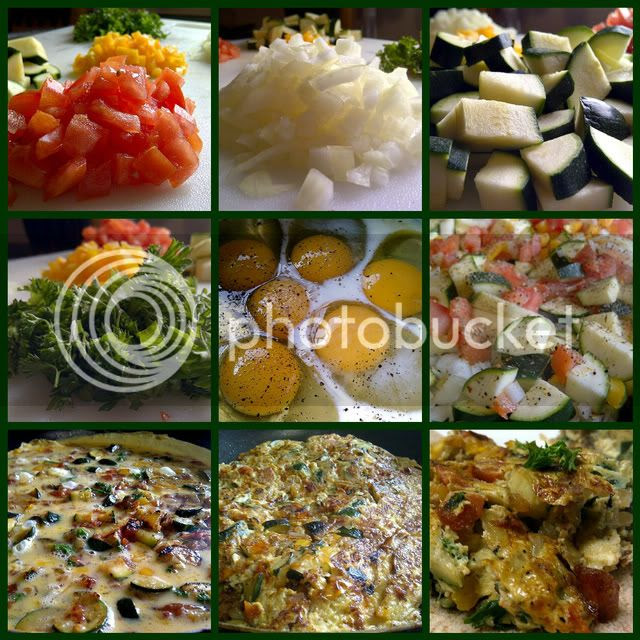 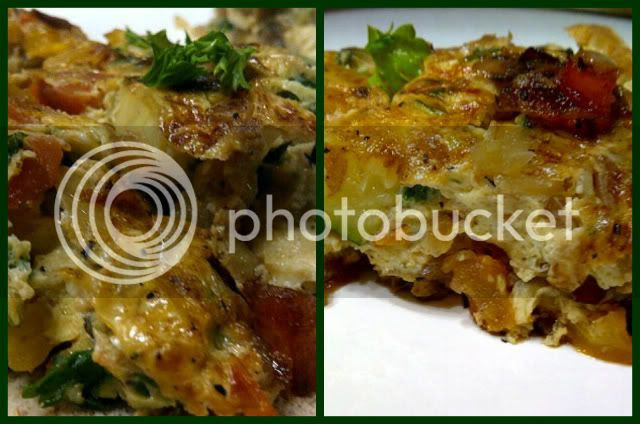 I want to share with you a healthier version of empanada dough and I swear to you, you will not think again of frying your empanadas. You will have flaky and not-oil laden empanadas with only a few ingredients and very simple steps.

Method:
Sift together the dry ingredients, set aside
In a large bow, whisk together oil and eggs
Add the flour mixture to the egg mixture
Stir together using a wooden spoon till it turns into a dough
The dough should be soft although a little bit sticky
Transfer the dough into a floured work surface
Knead the dough until it becomes soft and pliable
Easy on adding flour lest it becomes tough resulting in a hard crust
Poke the dough with your fingers, it should be done when your fingers come out clean and the dough springs back
Cut the dough into little balls and flatten with a rolling pin before filling 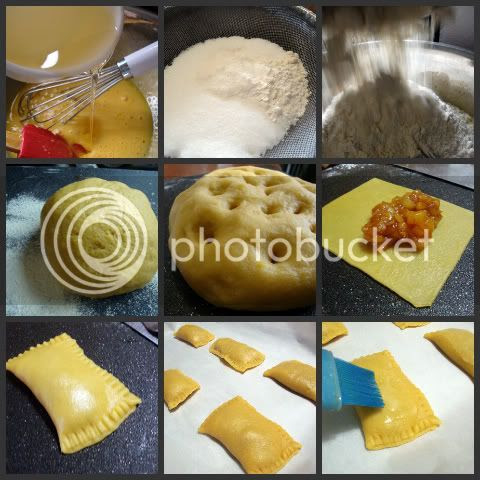 I used chicken with potatoes, raisins and green peas for the savory empanadas and peach and mango for the sweet ones. 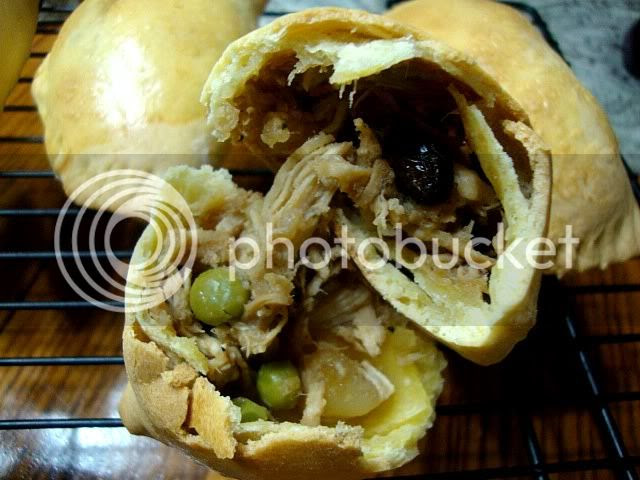 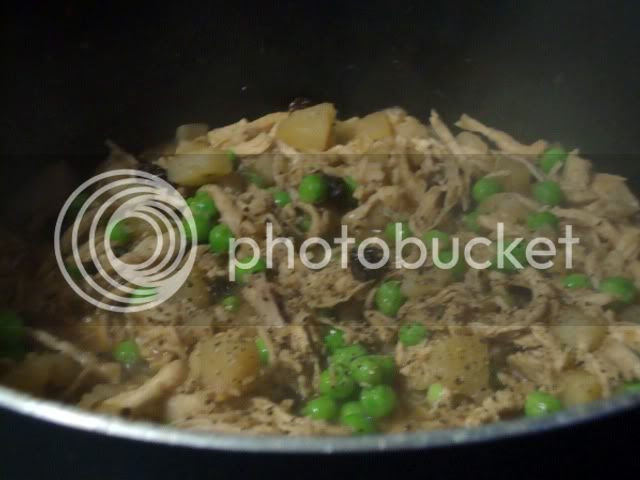 Method:
Heat oil in a pan over medium high heat
Saute the onion until translucent
Add the garlic and cook until fragrant
Add the potatoes and soy sauce and cook until tender, adding some of the chicken broth from boiling
Stir in chicken, raisins and green peas
Season with fresh cracked black pepper
Turn down the heat and just let it dry completely
Transfer to a plate and allow to cool

To make the empanada:

Preheat oven to 375 degrees F
Flatten the dough with a rolling pin
Spoon chicken filling off center of the dough
Fold the other half of the dough over
Using a dough cutter or a knife, cut the sides and shape it into a half circle
Using the fork tines, press the edges gently to seal
Repeat the same to and arrange each empanada in a baking sheet lined with un-greased parchment paper, I made 9 for each tray
Brush the tops with egg wash (1 egg slightly beaten with 2 tbsp water)
Bake for 25-28 minutes or until light golden brown. I check the bottom if it's brown which also means it's done. 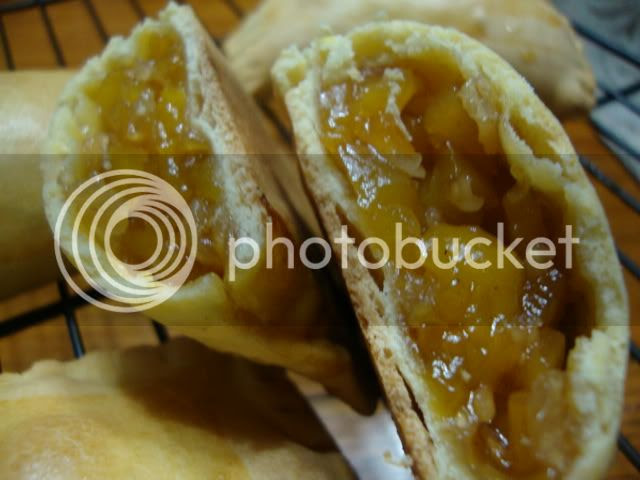 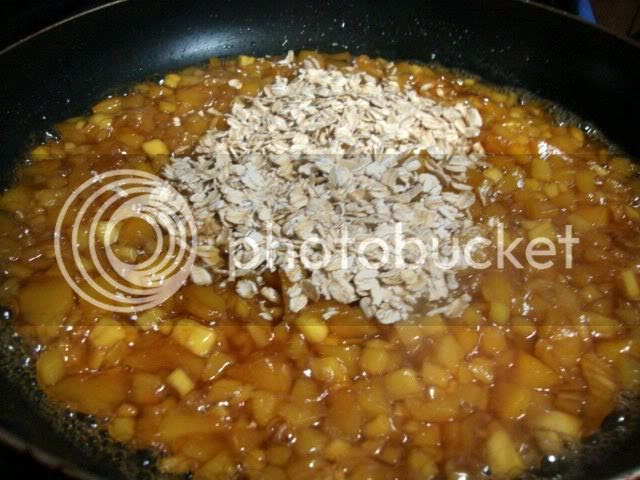 Method:
In a saucepan over medium high heat, place the mangoes, peaches,brown sugar and water
Allow to simmer until the fruits are tender
Add the old fashioned oats and stir
Cook for another two minutes or until the oats softens
Transfer to a plate and allow to cool

Use the same method in filling and baking the chicken empanada. I opt to cut the dough into squares so I have rectangular empanadas just to distinguish one from the other. 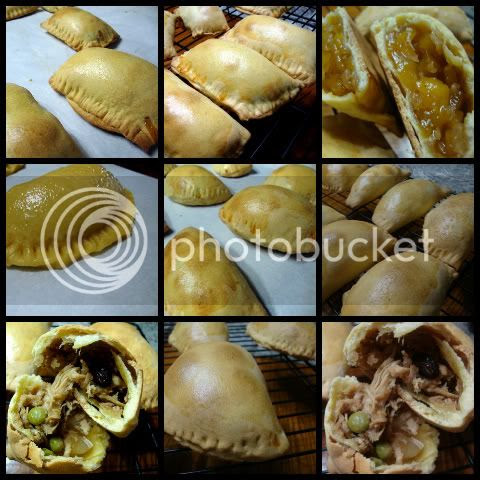 I'm in the zone today I guess, I still have two items but that will be on another post. It's fun making food the somewhat healthy way :-)
Email Post
Labels: Bakery Breakfast